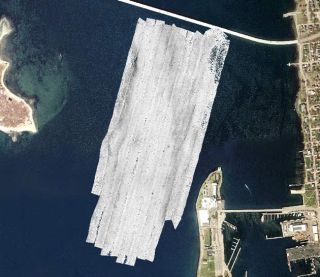 In Newport Harbor, the grey area is a mosaic that shows where side scan sonar was towed in a back-and-forth pattern much like mowing the lawn. Marine archaeologists studied the details of the sonar data sets and found patterns that led them to locating the wreckage of four additional Revolutionary War transports.
(Image: © URI and RIMAP)

Four ships from the Revolutionary War era, sunk in 1778, have been discovered in Newport Harbor, making Rhode Island home to the largest known "fleet" of shipwrecks from that war.

The ships were discovered in 2005 and announced today. Researchers used side-scan sonar, a method of using sound to map large areas of the seafloor [See the Map].

"We identified a series of eight targets using side-scan sonar, and four of them turned out to be shipwrecks," said Rod Mather, a University of Rhode Island associate professor. "While the archaeological significance of the sites, both individually and as a collection, is considerable, the historical implications of this discovery are even more compelling."

The ships are believed to have been part of a fleet of 13 British transporters sunk deliberately by the British to act as a barrier against French bombardment. This was to protect their stronghold in Newport against a French fleet sailing by in July and August of 1778.

"As is the case with many 18-century shipwrecks, the newly discovered vessels were pinned to the bottom of Newport Harbor with their own ballast stones," Mather said. "Over time, a complex series of biological, chemical and physical processes broke down the shipwrecks, leaving ballast piles onto which artifacts including cannons fell and below which there is almost certainly well preserved sections of the ships' lower hulls."