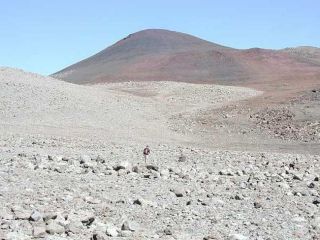 Gray rubble on the flanks of Mauna Kea on the island of Hawaii lie in contrast to the red volcanic rock behind them, and were deposited by a glacier that disappeared thousands of years ago.
(Image: © Oregon State University)

Boulders deposited by an ancient glacier that once covered the summit of Mauna Kea on the island of Hawaii are providing clues to past climate changes on Earth.

A new study has found geochemical clues near the summit of volcanic Mauna Kea that tell a story of ancient glacier formation, the influence of the most recent ice age, more frequent major storms in Hawaii, and the impact of a distant climatic event that changed much of the world.

Mauna Kea, at 13,803 feet (4,207 meters) above sea level, is in a sense the tallest mountain in the world because it rises 30,000 feet (9,144 m) from the sea floor. Dormant for thousands of years, it once featured a large glacier on its massive peak at the height of the last ice age about 21,000 years ago. As the ice age ended and the global climate warmed, the glacier began to disappear.

"Mauna Kea had a large glacial ice cap of about 70 square kilometers [27 square miles] until 14,500 years ago, which has now all disappeared," said Peter Clark, a geoscientist at Oregon State University. "We've been able to use new data to determine specifically when, where and most likely why the glacier existed and then disappeared."

The formation, size and movement of glaciers can provide valuable data, he said, because these characteristics reflect current and historic changes in temperature, precipitation or both.

The new research found that the glacier actually began to re-advance to almost its ice- age size about 15,400 years ago. That coincides almost exactly with a major slowdown of what scientists call the Atlantic meridional overturning circulation, or AMOC, in the North Atlantic Ocean.

The AMOC is part of a global ocean circulation system that carries heat from the tropics to the North Atlantic. This transported heat is the primary reason that much of Europe is warmer in the winter than would be expected, given the latitude of the continent.

Studies of past climate change indicate that the AMOC has slowed a number of times, in surprisingly short periods, causing substantial cooling of Europe. Because of that, the potential future decline of the current is of considerable interest.

But scientists have found that the AMOC does more than just keep northern Europe habitable. Its effects can extend far beyond that.

"The new data from Mauna Kea, along with other findings from geological archives preserved in oceans and lakes in many other areas, show that the decline of the AMOC basically caused climate changes all over the world," Clark said. "These connections are pretty remarkable, a current pattern in the North Atlantic affecting glacier development thousands of miles away in the Hawaiian Islands.

"The global impact of the AMOC changes," Clark added, "was just massive."

The study concludes that the growth of the Mauna Kea glacier caused by the AMOC current changes was a result of both colder conditions and a huge increase of precipitation on Mauna Kea – triple that of the present – that scientists believe may have been caused by more frequent cyclonic storm events hitting the Hawaiian Islands from the north.

The findings were supported by measurements of an isotope of helium being produced in boulders left by the Mauna Kea glacier thousands of years ago. The amount of this helium isotope reveals when the boulders were finally uncovered by ice and exposed to the atmosphere.

The deposits containing the boulders are the only record of glaciation in the northern subtropical Pacific Ocean. Nearby Mauna Loa probably also was glaciated, but evidence of its glaciation has since been destroyed by volcanic eruptions.

The study by Clark and colleagues provides additional evidence that rapid changes in the AMOC can trigger widespread global change. Some past abrupt decreases in the AMOC have been linked to an increase of freshwater flowing off the continents into the North Atlantic.

The potential under global warming for increases in freshwater from melting ice and changes in precipitation patterns have heightened concerns about the AMOC and related climate effects in the future, researchers said.

The new study, supported by the National Science Foundation, was detailed in the July 17 online edition of the journal Earth and Planetary Science Letters.

This article was provided by OurAmazingPlanet, a sister site to LiveScience