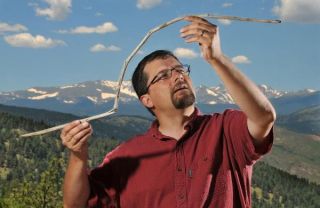 Craig Lee, of the University of Colorado Boulder, holds a 10,000-year-old atlatl dart that had been frozen in an ice sheet near Yellowstone National Park. The dart was straight when it was entombed and became bowed from the melting and barely survived being snapped in half by a passing animal.
(Image: © Casey A. Cass/University of Colorado.)

What looked like a small branch that blew off a tree during a storm turned out to be an ancient wooden hunting weapon wielded by Paleo Indians.

The 10,000-year-old atlatl dart was discovered in a melting patch of ice high in the Rocky Mountains close to Yellowstone National Park.

The dart was made from a birch sapling and still carried personal markings from the ancient hunter. When it was shot, the 3-foot-long (0.9 meter) dart had a projectile point on one end, and a cup or dimple on the other that would have attached to a hook on throwing tool called an atlatl.

The Native American hunter would have used the atlatl, a tool about 2 feet long (0.6 m), for leverage to achieve greater velocity, said Craig Lee, of the University of Colorado at Boulder, who discovered the weapon.

When he found it, the dart was bent with a sharp kink in it, likely the result of a mini-avalanche called a slump followed by a stomping from a large animal foot. "The inside of that kink seems to match what the shape of a big horned sheep hoof would've looked like," Lee told LiveScience.

The dart, along with other finds in melting ice, is in some ways the tip of the iceberg.

"We didn't realize until the early 2000s that there was a potential to find archaeological materials in association with melting permanent snow and ice in many areas of the globe," said Lee, who is a specialist in an emerging field called ice patch archaeology. "We're not talking about massive glaciers, we're talking about the smaller, more kinetically stable snowbanks that you might see if you go to Rocky Mountain National Park."

As glaciers and ice fields continue to melt at an unprecedented rate, increasingly older and significant artifacts, along with plant material, animal carcasses and even ancient feces, are being released from the ice that has gripped them for thousands of years, Lee said. In fact, this year scientists reported a treasure trove of ancient hunting tools discovered in the Canadian High Arctic as a result of melting ice patches.

Over the past decade, Lee and his colleagues have compiled biological and physical data on ice fields that may have been used by prehistoric hunters to kill animals seeking refuge from heat and insect swarms in the summer months.

"In these instances, what we're finding as archaeologists is stuff that was lost," Lee said. "Maybe you missed a shot and your weapon disappeared into the snowbank. It's like finding your keys when you drop them in snow. You're not going to find them until spring. Well, the spring hasn't come until these things started melting for the first time, in some instances, in many, many thousands of years."

Later this summer Lee and CU-Boulder student researchers will travel to Glacier National Park  to work with the Salish, Kootenai and Blackfeet tribes and researchers from the University of Wyoming to recover and protect artifacts that may have recently melted out of similar locations.

It's important the archeologists work quickly, since once organic artifacts, such as wooden tools or clothing, are exposed to the elements they can decompose quickly. The artifacts can also get disturbed by passerby animals, as was the recently discovered dart.

"So we really have to base our understanding about ancient times on these inorganic materials. But ice patches are giving us this window into organic technology that we just don't get in other environments," he added.