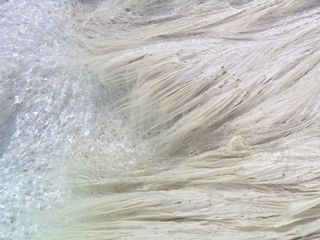 Fettuccini or capellini, anyone? Microbial mats in the Mammoth Springs hot springs in Yellowstone look a lot like a bowl of pasta.
(Image: © Bruce W. Fouke)

To find life on Mars, scientists should keep their eyes peeled for pasta.

Hot-spring-loving microbes create rock formations that look like fettuccini or capellini, according to a new NASA-funded study published online April 30 in the journal Astrobiology. Such pasta-shaped formations could be the first clues to life on other planets, said study author Bruce Fouke, a geobiologist at the University of Illinois at Urbana-Champaign.

"If we go to another planet with a rover, we would love to see living microbes or we'd love to see little green women and men in spacecraft," Fouke told Live Science. "But the reality is we're going to be looking for life that was probably growing in a hot spring, life that was fossilized." [9 Strange, Scientific Excuses for Why Humans Haven't Found Aliens Yet]

To investigate what this extraterrestrial life might look like, Fouke and his team started at Mammoth Hot Springs in Yellowstone National Park. At this popular tourist spot, hot geothermal water rich in minerals flows from the ground. The minerals precipitate out of the water, creating striking formations made of calcium carbonate, also known as travertine.

But these formations don't get their shape in a vacuum, Fouke said. They're built, in part, by microbes. In the new study, the researchers focused on the fast-flowing, particularly hot water at the head of the mineral springs. Here, the water ranges in temperature from 149 degrees to 162 degrees Fahrenheit (65 to 72 degrees Celsius) and has a low pH of 6.2 to 6.8, meaning it's more acidic than basic.

The researchers worked in careful conjunction with the National Parks Service, to avoid damaging the rock formations, taking samples of filamentous microbe mats that thrive in these waters. The mats look like long, mucus-y pasta strands. This is an adaptation, Fouke said. In calm waters, microbes settle out in slimy, unconsolidated mats. But in rushing water, the organisms have to cling to one another to survive. Each thread consists of trillions of microbes hanging on to each other for dear life. [The 7 Harshest Environments on Earth]

The researchers studied the genomes and protein production of their microbe samples. They discovered that 98% of the microbes living in these hot, fast-moving waters belong to a species called Sulfurihydrogenibium yellowstonense, or "sulfuri" for short.

Sulfuri is found in hot springs around the world, Fouke said, and lives by breaking down sulfur and using the resulting energy. The species evolved 2.5 billion years ago, when Earth's atmosphere contained barely any oxygen. That makes sulfuri likely very similar to any life that might have existed on ancient Mars, said Mayandi Sivaguru, a biologist at the University of Illinois at Urbana-Champaign and a co-author of the study.

If something like sulfuri did exist on another planet, it would have left fingerprints. In hot springs, change is a constant, Sivaguru told Live Science. Cooling geothermal waters constantly deposit minerals. But sulfuri, the researchers discovered, actively encourages this change. Proteins on the microbes' surfaces encourage the growth of calcium-carbonate crystals. Thus, the travertine that forms in the presence of sulfuri at Mammoth Hot Springs grows a billion times faster than travertine in other environments, Fouke said.

"It's an instant microbial fossil factory," he said.

Sulfuri survives by growing just a little bit faster than the minerals that get deposited around it, the researchers said. What's more, it uses the pasta-shaped rock to survive. Filaments of the microbes attach to the ridges formed by their fossilized compatriots, which boosts the microbes into very shallow water that contains the low levels of oxygen the microbes need to survive. (They die without oxygen, Fouke said, but they also die if exposed to the level of oxygen in air.)

Though any extraterrestrial microbe living in hot springs on another world would be a different species than sulfuri, it would probably have a similar lifestyle, Fouke said — it would have to, given the limited number of ways to make life work in such an extreme environment. Thus, the protein and genetic analyses done by the team would provide a benchmark for an alien comparison, should some future rover pick up a pasta-looking rock on a far-flung planet.

"It's the first study to ever have this kind of in-depth analysis of the environment, the rock deposits and also the omics," Fouke said, referring to the proteomics, transcriptomics and genomics that the researchers used to delve into the microbes' genetics, protein production and other biological processes. "That means now, for the first time, when we have a rock that is fettuccini-looking travertine, if that rock is collected and analyzed on Mars, we have the full suite of these extremely cutting-edge analyses for the microbes."

More information on the research is available in the digital book "The Art of Yellowstone Science — Mammoth Hot Springs as a Window on the Universe," by Fouke and colleagues.