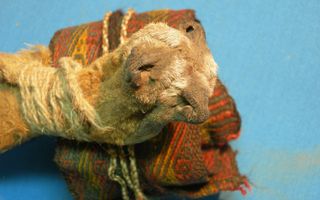 Artifacts from the ritual bundle include a pouch constructed of three fox snouts stitched together (foreground) and a colorful textile headband (background).
(Image: © Image courtesy of Juan V. Albarracin-Jordan and José M. Capriles)

A 1,000-year-old sack filled with psychoactive drugs, unearthed in Bolivia, suggests that Pre-Columbian societies may have used combinations of several hallucinogens in their rituals.

In the leather bag, scientists found a bundle of dried plant stems and ritual items that probably belonged to a shaman, including decorated tablets and other tools for preparing and inhaling psychoactive drugs.

Radiocarbon dating suggests that the sack and its contents date between A.D. 905 and 1170, researchers wrote in a new study. Chemical analysis revealed traces of compounds found in ayahuasca, a hallucinogenic potion made from plants found in the Amazon basin, and evidence of several other psychotropic substances. The find suggests that drugs producing different effects may have been combined during some rituals, according to the study. [Trippy Tales: The History of 8 Hallucinogens]

Native plant species with psychedelic qualities have been used in communities across South America for thousands of years. These drugs helped users to establish connections with ancestors and with supernatural forces that were often embodied by animals, such as foxes, jaguars, raptors and other predators, study co-author José Capriles, an assistant professor of anthropology at The Pennsylvania State University, told Live Science.

The sack also contained two llama-bone spatulas, a snuffing tube decorated with braids of human hair, dried plants, a woven headband, and a pouch stitched together from three fox snouts. The unusual pouch hints at the significance of foxes in pre-Columbian mythology, Capriles said.

"We know ethnographically that foxes have a special role in Indian culture," Capriles said. "They're seen as tricky characters, always up to no good."

Samples collected from the interior of the fox-snout pouch revealed signatures from at least five psychotropic compounds found in three plants: Erythroxylum, the source of coca; Anadenanthera, which produces a hallucinogen known as cebil; and Banisteriopsis caapi, the plant that is used to brew ayahuasca.

All of these plants grow in the tropical lowlands east of the Andes, hundreds of miles from where the bag was found, and it is thought that the people who performed drug-related rituals traveled great distances to collect the ingredients that they needed, Capriles said.

The scientists detected compounds such as bufotenine, dimethyltryptamine, harmine and cocaine. Their discovery represents the largest number of perception-altering drugs found together at an archaeological site in South America, according to the study.

The shaman who once owned this sack of hallucinogens likely possessed extensive botanical knowledge and was well-versed in the use of psychoactive compounds "to induce extraordinary states of consciousness," the scientists wrote.

The findings were published online today (May 6) in the journal Proceedings of the National Academies of Science.