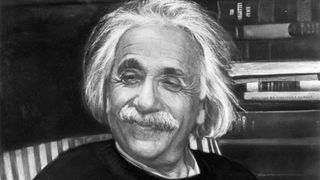 A recording of Albert Einstein made in 1951 during a casual conversation reveals the famed physicist's humorous side.
(Image: © Bettmann/Getty )

A one-of-a-kind recording offered at auction presents a rare and fascinating glimpse of physicist Albert Einstein.

Though Einstein was known around the world, he was notoriously publicity-shy, so there is little audio evidence of his life outside of the usual media spotlight. But in a casual conversation recorded more than 60 years ago, the scientist cracked jokes, discussed his love of music and delved into global politics.

Recorded in 1951 on long-playing vinyl discs at the Institute for Advanced Studies in Princeton, New Jersey, the intriguing conversation between Einstein and his friends Jack and Frances Rosenberg has never been accessible by the public — until now. [6 Ways Albert Einstein Fought for Civil Rights]

On Saturday (May 4) at 12 p.m. ET, bidding opens online at Heritage Auctions for a reel-to-reel tape containing the 33-minute conversation between Einstein and his two friends. Einstein speaks in English that is heavily accented — "as expected" — and the serious topics that he tackles are interspersed with laughter and jokes, according to a description in the auction listing.

Einstein was known for his appreciation of music, and in the recording, he described a love of Brahms, Schubert and Beethoven. He praised a favorite musical composition, "Violin Concerto" by the Romanian composer George Enescu, saying, "In my youth, I had heard nothing better."

Heritage Auctions shared a 3-minute preview of the recording on their website, featuring Einstein's thoughts on the espionage trial of Julius and Ethel Rosenberg — U.S. citizens who were accused in 1951 of sharing classified nuclear weapons information with the Soviet Union.

The case against the Rosenbergs was controversial, with prosecutors seeking severe penalties for crimes that many said were unsupported by solid evidence, according to the Atomic Heritage Foundation. On the tape, Einstein suggested that what was happening to the Rosenbergs was "unfair" and that the actions against them were "unwise." The Rosenbergs were later found guilty and sentenced to death. They were executed in 1953.

In the complete recording, Einstein also expressed regret about his own role in ushering the U.S. toward the development of atomic bombs, through a letter that he sent to FDR in 1939.

"I believe it was a great misfortune," he said, adding, "I repent it very much." Einstein then mused that if FDR had lived, the president would never have used the atom bomb. "This I am convinced," he said.

However, Einstein thought it was good that the Russians had recently developed their own atomic bomb, declaring it "better for world welfare" if the U.S. were not the only nation to possess these terrible weapons. This perspective would likely not have been popular in America at the time, Don Ackerman, a consignment director in the Historical Department at Heritage Auctions, told Live Science.

A copy of the recording resides in the Einstein collection at the California Institute of Technology, but the auction offers an opportunity to own a unique interview with the renowned scientist "that's not available to the general public," Ackerman said.

Bidding for the audio tape starts at $3,500, and the winner will also receive a CD containing the recording, according to the Heritage Auction website.