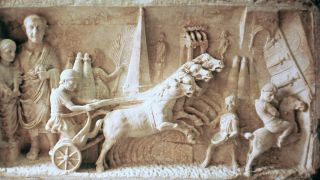 During the first century, people across Rome were obsessed with chariot races, which frequently produced horrific crashes.

However, one charioteer steered his way to victory more than 2,000 times. Flavius Scorpus began his career as a slave, but rose to heights of fame and fortune.

Just how did he do it? And how dangerous were his races? To find out, experts built and test-drove a Roman-era racing chariot, finding that the chariots were designed to maximize the spectacle of racing, but did little to protect the driver. Scorpus' feats — and the pulse-pounding risks of charioteering — are featured in the Smithsonian Channel's new two-part documentary series "Rome's Chariot Superstar." [In Photos: Early Bronze Age Chariot Burial]

Scorpus began racing as a teenager in the outer provinces of the Roman Empire, arriving at the Circus Maximus — Rome's biggest stadium and racetrack — in A.D. 90, when he was about 21 years old. He likely competed in a total of 5,000 to 6,000 races in his 10-year career, "which meant he was probably racing 5[00] or 600 times a year," Jerry Toner, a fellow and director of studies with Churchill College at the University of Cambridge in the United Kingdom, said in the documentary.

"He's out there risking his life on a very regular basis," Toner said.

His feats were so risky because racing vehicles favored swiftness over safety. Unlike the sturdier war chariots of the Egyptians and Hittites, Roman chariots were built for speed and spectacle, not battle, historical racer Mike Loades told Live Science. Wheels on Roman chariots were small, and the chariots were light, made of wood and rawhide; the platform measured only about 3 feet (1 meter) from the rear axle to the front rail.

And unlike war chariots, which were led by at most two horses, Roman chariots were pulled by four horses, which made them trickier to control more likely to crash.

War chariots also have waist-high rails at the front, so that an archer could brace himself while standing upright, Loades said. But in the Roman chariots, the rail was much lower — at knee height. When Loades test-drove a reconstructed chariot, he found that while this design would have shielded the charioteer from stones and dust kicked up by the horses, if he happened to lose his balance, it would only stabilize him if he dropped to one knee on the platform, Loades explained.

"It looked very dangerous — that plays into the Roman idea of theater and excitement and jeopardy," he said.

A typical Roman race featured 12 chariots, with 48 horses lined up abreast. When the race began, it would have resembled a stampede. Because of this crowded field, one of the most frequent risks on the racetrack was "shipwrecks," as the Romans called them — when chariots would tumble and crash on the track, becoming harrowing roadblocks for the remaining racers.

Over 10 years of racing, Scorpus' prowess earned him quantities of gold estimated to be worth $15 billion today, experts calculated in "Circus Maximus." The chariot-racing superstar was killed midrace in A.D. 95, and "he probably died in one of those dramatic shipwrecks," Toner said.

"Rome's Chariot Superstar" premiers on the Smithsonian Channel on April 21 at 8 p.m. EDT.