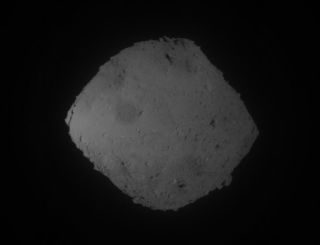 The Hayabusa2 spacecraft has been studying the 3,000-foot-wide (900 meters) Ryugu up close since last June.
(Image: © JAXA)

A Japanese spacecraft deployed a heavy, explosive-packed copper plate toward the asteroid Ryugu in an attempt to create an artificial crater last night (April 4), but it's still unclear how the dramatic operation went.

The Hayabusa2 spacecraft, which has been studying the 3,000-foot-wide (900 meters) Ryugu up close since last June, released a 4.4-lb. (2 kilograms) hunk of copper late last night, along with a camera known as DCAM3 to record this "Small Carry-on Impactor" (SCI) operation.

"The spacecraft state is normal and it was confirmed that the evacuation operation, the separation of the SCI and DCAM3 went as planned. The SCI separation and evacuation sequence were a success," mission team members wrote on Twitter around 2 a.m. EDT (0600 GMT and 3 p.m. Japan time) today (April 5).

But the detonation, and the resulting impact, had not yet been confirmed as of the time of this writing.

This procedure wasn't for entertainment — instead, it will help scientists understand Ryugu's interior.

During the carefully choreographed procedure, the Hayabusa2 mothership retreated behind the asteroid, for safety. (That's the "evacuation" the mission team mentioned in the above tweet.)

The main drama played out over the course of about 40 minutes, from the impactor's deployment to the (presumed) impact itself. But, provided it was successful, the operation will occupy scientists for much longer as they pore over images captured during the procedure. The researchers hope that by watching how debris flies away from the crater, they'll be able to better understand what Ryugu is made of.

Over the next two weeks or so, the main Hayabusa2 spacecraft will slowly creep out of hiding and return to its "home position" about 12.4 miles (20 kilometers) above Ryugu's surface.

If all goes well, Hayabusa2 will take a closer look at the crater itself to study the interior of the asteroid, where radiation hasn't affected the rock. The team running the mission even hopes they'll be able to grab a sample of material from this location, to add to the surface sample the probe collected in February.

Indeed, Hayabusa2 has been extremely busy during its time at Ryugu. In addition to the sample-collection and SCI activities, the probe has studied the asteroid in detail and released two hopping minirovers and a 22-lb. (10 kg) lander onto the space rock's surface.

And Hayabusa2 still has one more tool to deploy: MINERVA-II 2, a third, tiny, hopping rover, similar to those the probe deployed in September. The mission team currently hopes to send MINERVA-II 2 out onto Ryugu's surface late this summer.

After that task is complete, all that's left for Hayabusa2 to do is head back to Earth, carrying with it precious souvenirs of the space rock it will have spent a year and a half studying.

That sample is scheduled to come down under parachute in December 2020, in a special return capsule.