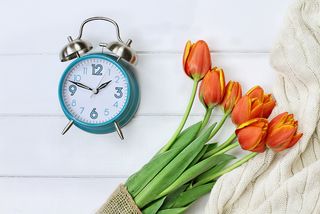 Get ready to "spring forward" as people throughout the United States lose an hour of sleep in the early morning of Sunday.

Daylight saving time (not savings, as many people say) begins at 2 a.m. local time on Sunday, March 10. While "smart" devices may change time automatically, don't forget to turn manual clocks an hour ahead, from 2 a.m. to 3 a.m.

Daylight saving time (DST) is designed to provide an extra hour of evening sunlight, and it will stay in effect for eight months until Nov. 3, when daylight saving time ends for the year. [Daylight Saving Time 2019: A Guide to the When, Why, What and How]

Benjamin Franklin, the brainchild of DST, proposed the idea in 1784 as a way to conserve energy, said David Prerau, author of "Seize the Daylight: The Curious and Contentious Story of Daylight Saving Time" (Thunder's Mouth Press, 2005). Ideally, people would spend time outside, enjoying the extra hour of daylight, rather than sit inside, wasting energy on lighting, Franklin reasoned.

However, it's hard to say whether daylight saving translates into energy savings, according to several studies, including a 2007 Department of Energy study and a 1997 study on a residential home in Kansas, Live Science previously reported.

Even so, Franklin's idea spread in the 20th century. In 1908, a city in Ontario, Canada, became the first modern region to officially implement DST, according to Time and Date. The Germans began following DST in May 1916, with the goal of conserving fuel during World War I. The rest of Europe followed suit soon after, and the United States officially adopted daylight saving time in 1918.

However, American farmers objected to the change, as it eliminated an hour of their morning light (it's a myth that daylight saving time helps farmers). So, the country dropped the time change until World War II, and only a select number of states chose to follow it after the war's end.

Currently, two U.S. states — Hawaii and most of Arizona (with the exception of the Navajo Nation) — don't observe daylight saving time.

Every year, several states put forth bills or voter-led initiatives to ditch daylight saving time. However, it's anyone's guess whether these bills will become enforced law. Until then, don't forget to wake up an hour earlier on Sunday, unless you want to be late for brunch.