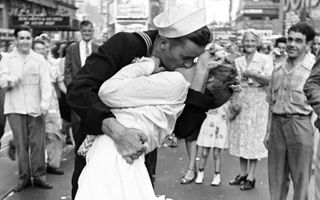 As pedestrians watch, an American sailor passionately kisses a white-uniformed woman in Times Square to celebrate the long awaited-victory over Japan. This is an outtake from a series of photos shot by Alfred Eisenstaedt.
(Image: © Alfred Eisenstaedt/The LIFE Picture Collection/Getty)

A man who claimed to be the sailor in an iconic photo of a kiss captured in Times Square at the close of World War II died on Sunday (Feb. 17) at the age of 95.

In the image, one of a series snapped by photographer Alfred Eisenstaedt for Life Magazine on Aug. 14, 1945, a U.S. Navy sailor and a white-uniformed woman are locked in what appears to be a passionate embrace. Though their names were not recorded at the time, they are now thought to be George Mendonsa and Greta Friedman, the BBC reported.

But Mendonsa and Friedman, who died in 2016 at the age of 92, were strangers to each other when he grabbed and kissed her. Though the photo was long regarded as celebratory and romantic, many view the non-consensual kiss as "a very public act of sexual assault," Time Magazine wrote in 2014. [6 Ways Sexual Harassment Damages Women's Health]

Mendonsa died in the early morning after a seizure, following a fall at his assisted-living facility in Middletown, Rhode Island, his daughter, Sharon Molleur, told the Providence Journal.

When Eisenstaedt captured the photograph on V-J Day (Victory over Japan Day), U.S. officials had just announced Japan's surrender — WWII was finally over. As the news spread across the country, emotions were running high; "the nation let loose," according to Time.

Eisenstaedt was roaming Times Square with his Leica camera and already had his eye on a jubilant-looking sailor when he "saw something white being grabbed," he wrote in the book "Eisenstaedt on Eisenstaedt: A Self Portrait" (Abbeville Press, 1985).

"I turned around and clicked the moment the sailor kissed the nurse. If she had been dressed in a dark dress, I would never have taken the picture," Eisenstaedt wrote.

Friedman — who was a dental assistant, not a nurse — had left her office to see the news about V-J Day, she told the Veterans History Project in 2005.

"Suddenly I was grabbed by a sailor," Friedman said. "It wasn't that much of a kiss, it was more of a jubilant act that he didn't have to go back [to fight in the war]," she added.

In the decades after the image was taken, 11 men and three women came forward claiming to be the photo's subjects, but Friedman was "most likely" the woman in the image, according to The New York Times. And digital 3D mapping of Mendonsa's face in 2005 showed that his face was a near-perfect match to the face of the man gripping Friedman in the photo, The Times reported.

That moment was titled "V-J Day in Times Square," but is also known as "The Kiss," according to The Times. Featured on the cover of Life, the photo is thought to be Eisenstaedt's most famous image and is "a classic example of photojournalism," The Times wrote in his obituary in 1995. But it also raises troubling questions about the forcefulness of this non-consensual act.

On that day, Mendonsa had "popped a few drinks" at a bar before heading to Times Square — with his girlfriend — when Friedman's white uniform caught his attention, he told the Veterans History Project in 2005. Mendonsa mistook her for a nurse, and explained in the interview that he had "a soft spot for nurses."

"It was the uniform that did it," Mendonsa said. "I believe if that girl did not have a nurse's uniform on, that I never would have grabbed her."

The incident certainly wasn't "a romantic event" for Friedman, who was overpowered by Mendonsa at the time, she said in her Veterans History Project interview.

"He was very strong, he was just holding me tight," she said. "It wasn't my choice to be kissed. The guy just came over and kissed or grabbed."