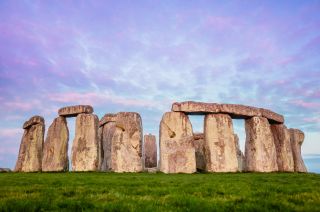 Stonehenge and similar large, arranged rock structures around Europe may have a common origin.

Hunter-gatherers in northwestern France might have first created these megaliths around 7,000 years ago and spread them throughout Europe, according to a new study published yesterday (Feb.11) in the journal Proceedings of the National Academy of Sciences.

It was previously thought that megaliths originated in the Near East, but nowadays more and more anthropologists agree that they were independently invented in various places across Europe, according to the magazine Science.

In this new study, Bettina Schulz Paulsson, an archaeologist at the University of Gothenburg in Sweden, searched through the literature to find radiocarbon data (a method that reveals ages of rocks and structures) for over 2,400 sites across Europe. She looked at megaliths, pre-megalithic graves, and any information she could find on how the rocks were crafted and the customs of the hands that crafted them. [In Photos: A Walk Through Stonehenge]

She found that the earliest megaliths in Europe originated in northwestern France around 4700 B.C. This region also happens to be the only known megalith site that also contains grave sites that date back to 5000 B.C., which might indicate that such megaliths originated there, Paulsson wrote in the journal article.

Around 400 years after those first megaliths, in 4300 B.C., similar structures began to pop up on the coasts of southern France, the Mediterranean, the Iberian Peninsula and other areas. Stonehenge itself was likely created around 2400 B.C.

Because these structures typically popped up near the coasts, Paulsson thinks the idea of megaliths might have been spread by sailors at the time, according to Science. In fact, the architects' interest in the sea is engraved in markings of sperm whales and marine life on those first northwestern France megaliths.

While some researchers agree with the findings, others say it's difficult to rule out the possibility that people of various regions invented these megaliths independently or that another region had earlier megaliths, according to Science.