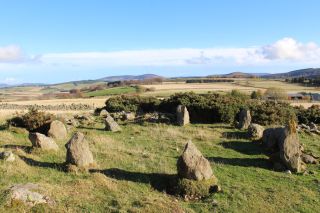 Archaeologists thought this stone circle in Scotland's Aberdeenshire was more than 3,500 years old. But it is now known to have been built by a farmer in the 1990s.
(Image: © Neil Ackerman/Aberdeenshire Council Archaeology Service)

A stone circle in northeast Scotland that archaeologists thought was built thousands of years ago has turned out to be just a few decades old.

Earlier this month, archaeologists from Aberdeenshire Council and the Historic Environment Scotland agency announced that the circle of stones in a remote farm field near Alford, west of Aberdeen, was an ancient example of its kind, between 3,500 and 4,500 years old, Live Science reported on Jan. 9.

More than 90 stone circles with a large "recumbent" stone lying on its side and dating to that period have been found in the northeast of Scotland — but almost nowhere else in the British Isles.

Although the stone circle was thought to be unknown to science, some local people had remembered seeing large stones in that area, which is far away from the main roads. [In Photos: Ancient Stone Monument Discovered in Scotland]

But on Monday (Jan. 21), Aberdeenshire Council archaeologist Neil Ackerman made a melancholy announcement on Twitter — that further research had determined the stone circle near Alford was a relatively modern replica, and not ancient at all.

"If you are having an awkward day at work, at least you're not that guy who identified a new prehistoric stone circle to the press that now turns out to be about 20 years old," Ackerman tweeted.

Aberdeenshire Council also put out a news release on Monday, describing the latest findings about the stone circle.

The stone circle near Alford initially baffled archaeologists, because it wasn't noted on any land records or archaeological reports about that area.

One of the former farm owners had contacted the archaeologists studying the Alford stone circle, informing them that he had built it out of nearby rocks sometime in the 1990s, Ackerman told Live Science on Monday.

Although some details of the Alford circle didn't match some of archaeological features of stone circles elsewhere in the region — it is a little smaller than usual, for example — those discrepancies weren't seen as big issues at the time, Ackerman said.

Additionally, the farmer who built the circle seemed to know quite a lot about the local style of ancient stone circles, he said. [Image Gallery: Stone Structure Hidden Under Sea of Galilee]

"There are various replicas around, but they are usually not as good as this," he said. "The guy who built this really knew what he was doing."

"It is quite interesting that in building a stone circle, he did not just put a bunch of stones in a circle, he has very closely copied a regional monument type," he said.

The farmer had not been trying to trick people into thinking that the circle was ancient, Ackerman said — in fact, he seems to have never told anyone about it, which is why it didn't appear on any records.

The area where the stone circle was found is especially scenic, like the surroundings of genuinely ancient recumbent stone circles; and it appeared that the farmer had built the circle out of large stones that have been cleared from nearby fields, Ackerman said.

"It is a fairly labor-intensive hobby, but yes, — he seems to have built it just for his own amusement," Ackerman said. "There is a nice view, and he built something to show it off, or to enjoy it from."

Some elderly people who remembered the area generations ago may have actually seen stones that had been piled up from field clearances, he said.

Ackerman spent much of Monday fielding media inquiries about the ancient stone circle that turned out to be not so ancient, but he was philosophical about the latest development from an archaeological point of view.

"It shows the human side of the job a little bit," he said. "It is very difficult to date these things, because there is no way to date when a stone was put in the ground."

Announcing that the stone circle had turned out to be a modern replica was certainly better than making no announcement at all, he said.

"I think it is actually good archaeological practice, the way it has been done," Ackerman said: "It is just a shame that it has all very quickly completely changed, as it were. But still, it is very interesting."