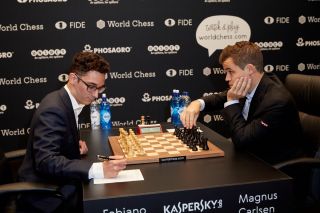 For the first time since Bobby Fischer's heyday of the 1970s, an American is set to challenge for the World Chess Championship.

As Time reported Nov. 6, Fabiano Caruana of Brooklyn, New York, will play a 12-game match against Magnus Carlsen of Norway starting today (Nov. 9). The match will run for three weeks at The College (a Victorian house turned events venue) in Holborn, London. Carlsen has held the championship since 2013. If Caruana unseats Carlsen, he will bring the championship back to the U.S. for the first time since Fischer's three-year reign ended in 1975.

"Fabiano has the power to be better than Carlsen," Time quoted Mark Crowther, editor of The Week in Chess, as saying. "There have been very, very few players you can say that about. I honestly don't know who's going to win this match. It's a total toss-up."

To reach the multi-game grudge match against Carlsen, Caruana had to defeat seven other players in the March Candidates Tournament in Berlin, Time reported. One other American competed in that tournament: Wesley So of Minnesota, Minnesota.

Carlsen won the first game of the match, which according to the Guardian began with a SNAFU involving actor Woody Harrelson. He did so, according the Guardian, by "pressing hard for victory during the fourth hour of play after riskily giving up a pawn for a venomous attack."