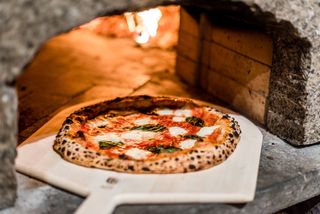 If you'd like to eat the world's most scientifically perfect pizza, you have two options: One, fly to Rome and order a Margherita pizza fresh from the brick oven; or, two, solve a long thermodynamic equation to simulate that glorious Italian pizza in your pathetic electric oven at home.

That's the basic premise of a new paper titled "The Physics of Baking Good Pizza," published earlier this year in the preprint journal arXiv. In the mouth-watering study, two physicists (Andrey Varlamov of the Institute of Superconductors, Oxides and Other Innovative Materials and Devices in Rome and Andreas Glatz of Northern Illinois University) and one food anthropologist (Sergio Grasso, an author and filmmaker based in Rome) recall the scientifically unassailable pizzas they sampled while the three were working in Rome.

Their pie of choice was a simple pizza Margherita — a personal pie of tomato, mozzarella and basil (representing the red, white and green of the Italian flag) — prepped and brick-oven-baked before their eyes by a seasoned "pizzaiolo," which is Italian for "dude who makes pizzas." In 2 minutes flat, the authors watched Rome's pizza artisans transform doughy discs into golden pies "covered with mouth-watering bubbles of cheese," and demanding to be washed down with "a pitcher of good beer." (The physics of what makes a beer "a good beer" are lamentably not addressed in this paper.) [Science You Can Eat: 10 Things You Didn't Know About Food]

The secret, a proud pizzaiolo informed the authors, was the physics of the brick oven. With a wood fire burning in one corner, heat radiates uniformly through the curved walls and stone floor of the oven, ensuring an even bake on all sides of the pie. Under ideal conditions, the authors wrote, a single pizza Margherita could be baked to perfection in precisely 2 minutes in a brick oven heated to 625 degrees Fahrenheit (330 degrees Celsius). When additional toppings require additional bake time, some pizzaiolos may lift the pie up with a wooden or aluminum spade for an additional 30 seconds or so "in order to expose the pizza to just heat irradiation" and prevent a toasty bottom, the authors wrote.

Don't own a brick oven at home, because you're a normal person? The authors have helpfully described how to simulate that pizza "a la Roma" perfection in a standard electric oven — with physics!

If you are baking your pie in an electric oven, chances are your pizza is resting on a metal tray or baking rack. Because the heat conductivity of metal is significantly more powerful than that of brick, the bottom of your pizza will absorb heat much more quickly than the rest of the pie. Baking your dough at 625 degrees F for 2 minutes will therefore turn your pizza "into coal," the authors wrote. And there is no beer good enough to salvage a coal pie.

Using a long thermodynamic equation (which you can read for yourself in their paper; it's "equation #13"), the authors determined that a pizza cooked in an electric oven could meet similar conditions to a Roman brick oven by turning the heat down to 450 degrees F (230 degrees C) for 170 seconds. Crucially, the authors noted, aspiring pizzaiolos cooking toppings with higher water content (basically, any additional vegetables) may need to leave their pies in the oven longer, as the pizza will return more heat to the oven via evaporation.

The authors concluded that, while your homemade pizza will probably never be as perfect as a fresh, firebrick pie devoured in front of 1,000 eager pigeons near the Colosseum, physics can help you take a step in the right direction. And, if that's a problem for you, perhaps try making some steamed dumplings instead. The authors have a paper on that too.