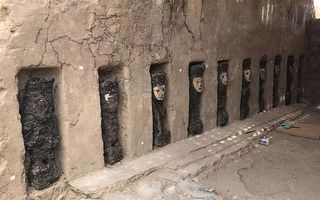 Archaeologists discovered 19 of the hand-carved wooden statues, some of them wearing clay masks, in a corridor in the ancient city of Chan Chan, Peru.
(Image: © Peru Ministry of Culture)

Archaeologists have discovered 19 humanlike wooden idols, some of them wearing beige clay masks on their faces, in the ancient city of Chan Chan, Peru, according to the country's Ministry of Culture.

The more than 750-year-old hand-carved idols stand nearly 28 inches (70 centimeters) tall, or about the height of two bowling-ball pins stacked on top of one another. The idols were discovered in rectangular recesses that line an adobe-made corridor, the ministry announced on Oct. 22.

These idols are the oldest yet to be discovered at the Chan Chan archaeological complex in northern Peru, which was once the capital of the Chimú Kingdom, a culture that lasted from about A.D. 900 to 1430, when it fell to the Inca Empire. [In Photos: Moche Treasures Hidden in Peru Temple]

Chan Chan has been a recognized World Heritage Site with the United Nations Educational, Scientific and Cultural Organization (UNESCO) since 1986, but the idol-lined corridor was found only recently, the ministry said.

"In the passageway, recently found in the citadel of Chan Chan, 19 wooden idols covered with clay masks have been found," Patricia Balbuena, Peru's head of the Ministry of Culture, said in statement. Above the idols, the passageway has decorated walls, which include motifs of wave and landscapes, as well as animal-like images that feature a cat or lunar animal, she said.

It's likely that this 108-foot-long (33 meters) corridor was an entryway for a ceremonial center or plaza, Balbuena noted.

Anybody walking down the passageway would have been struck by the mysterious wooden idols. Each statue was carved in a unique way, and some wear clay masks. Others carry a scepter in one hand and are flanked by a circular object that could be a shield, Balbuena said.

The idols were found during the restoration of the walls around the Utzh An complex, which began in June 2017 and is expected to end in May 2020.

In an Oct. 22 tweet, Balbuena wrote (in Spanish, but translated here), "I am happy with my visit to Trujillo, my hometown, to report new findings in ChanChan, and report on the project 'Altura para la cultura,' which seeks to recover buildings that are cultural heritage. Grateful for the recognition of the Municipality of Trujillo."