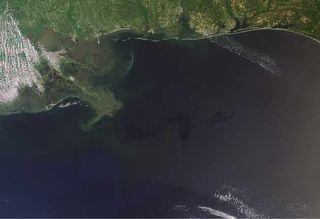 In this image acquired by ESA's Envisat on April 29, oil from the massive spill in the Gulf of Mexico can be seen as a dark blue swirl advancing toward the Louisiana coast. Envisat acquired this image with its Medium Resolution Imaging Spectrometer (MERIS). Credits: ESA

The dark swirl of the expanding oil spill in the Gulf of Mexico was photographed yesterday from space as the slick inched ever closer to the Louisiana coast.

The latest image from the European Space Agency's Envisat satellite showed that the oil spill – five times larger than first estimated – had spread to just under 3 miles (5 kilometers) from the coast, threatening an environmental disaster.

To help with the cleanup effort, Envisat images are being provided to U.S. authorities immediately after they are acquired through the International Charter Space and Major Disasters. The Charter is an international collaboration between worldwide space agencies to put satellite remote sensing at the service of civil protection agencies and others in response to natural and man-made disasters.

Envisat also used its radar capabilities to observe the spill, which produced a black-and-white image on Wednesday, in which the slick is visible as a lighter grey C-shape just south-southeast of the Louisiana-Mississippi coast (on the left side of the large black pattern stretching across the Gulf in the image).

Radar is especially suited for detecting oil spills as it works day and night, is able to see through clouds, unlike optical sensors, and is especially sensitive to the smoother water surface caused by the presence of oil. Depending on the situation, oil is harder to detect in optical satellite observations as the changes on the water surface are not as pronounced.

The satellite is slated to take its next set of images of the oil spill on late Saturday and Sunday morning if clouds aren't blocking its view.