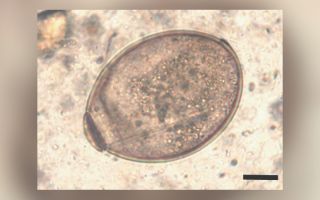 Eggs from the tapeworm Diphyllobothrium latum helped scientists piece together a picture of a changing human diet in a German port town during the 14th century.
(Image: © Courtesy of Adrian Smith)

Sifting through preserved poop from a medieval port city in Germany, scientists discovered that the town's inhabitants were riddled with tapeworms.

The discovery also revealed a fascinating hidden record of dietary changes during that period, according to a new study. [The 10 Most Diabolical and Disgusting Parasites]

Previously, archaeological evidence has shown that that parasitic worms such as flatworms, roundworms and tapeworms — part of a group known as helminths — have been infecting people for centuries, the scientists reported.

"Humans can harbor them for years," study co-author Adrian Smith, an associate professor of zoology and infectious disease biology at the University of Oxford in the United Kingdom, told Live Science in an email. By excreting parasites' eggs, infested people helping the pests to spread, leaving a trail of egg-filled poo "wherever they go," Smith said.

To understand how the parasites affected human health, Smith and his colleagues collected 152 poop samples from latrines and waste ditches at six sites in Europe, which dated from 3600 B.C. to the 17th century.

The scientists peered at preserved poo parasites through microscopes to identify the microbes' genuses and used DNA samples to confirm the species, Smith said. Parasitic nematode eggs appeared in samples from all the sites. But a group of 14th-century samples from one location — Lübeck, a medieval port city, then an important trading hub in Germany — stood out.

Fecal evidence from Lübeck contained "substantial numbers" of eggs belonging to the tapeworms Diphyllobothrium latum and Taenia saginata, which surprised the scientists, Smith said. Tapeworm eggs are typically absent or very scarce in archaeological studies of human poo; some of the Lübeck samples, however, contained hundreds or even thousands of eggs in a single gram of waste, Smith said.

Tapeworms are typically transmitted to people when they eat undercooked fish or red meat, Smith explained. The worms in the Lübeck samples became much more common beginning in the 1300s, which suggests a significant change in the local diet, likely one that increased people's consumption of meat or fish, Smith said.

The early 1300s also brought industrial changes to Lübeck that may have affected the life cycle of D. latum, a tapeworm found in fish, Smith told Live Science. Growing numbers of tanneries and butcher shops may have polluted rivers where fish infected with D. latum lived, driving changes in the parasite that made human hosts more attractive, he said.

The researchers' discovery provides compelling clues about the livelihoods and health of medieval people, their levels of sanitation, "and, as seen with the tapeworms, dietary preferences," Smith said in the email.

"We have only begun to scratch the surface of how useful parasites might be" in archaeology, he said.

The findings were published online Oct. 3 in the journal Proceedings of the Royal Society B.