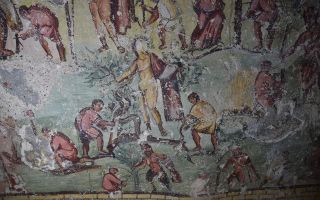 A preserved painting shows the clearing of the site of Capitolias, with the assistance of Dionysus and other gods.
(Image: © Copyright CNRS HiSoMA)

In an ancient Roman tomb that was recently discovered in Jordan, a colorful mural offers a comics-like glimpse of what life may have been like in the bustling city of Capitolias thousands of years ago.

Hundreds of illustrated figures — humans, animals and gods — appear in the paintings. Their poses demonstrate routine activities, such as harvesting crops and building a defensive wall, in a city that was a thriving center of commerce and culture during the second century A.D.

But the mural doesn't just contain pictures. Dozens of inscriptions appear alongside the figures; they describe the action in the local language of Aramaic (though written in Greek letters), and they seem to serve the same purpose as speech bubbles do in comics, the French National Center for Scientific Research (CNRS) recently reported. [30 of the World's Most Valuable Treasures That Are Still Missing]

"The inscriptions are actually similar to speech bubbles in comic books, because they describe the activities of the characters, who offer explanations of what they are doing ('I am cutting (stone),' 'Alas for me! I am dead!'), which is also extraordinary," Jean-Baptiste Yon, a researcher with the History and Sources of Ancient Worlds Laboratory (HiSoMA) in France, told CNRS.

First unearthed in 2016 in the town of Beyt Ras, the tomb and its remarkable artwork were recently revealed by the Department of Antiquities of Jordan, according to CNRS. Researchers with CNRS were among the international team of archaeologists working to excavate and interpret the contents of the ancient tomb.

Capitolias was part of a region known as Decapolis, and other tombs that have survived from this area were also decorated with colorful paintings. But the artwork inside this new discovery is unusual in its abundance and detail, HiSoMA representatives said in a statement. And what really made archaeologists take notice was the Aramaic text, which is rarely seen in descriptive murals from this period alongside the more traditional Greek labels, Yon told CNRS.

Experts will present their initial findings from this unique site at the 14th International Conference on the History and Archaeology of Jordan, which will be held in Florence, Italy, in January 2019.