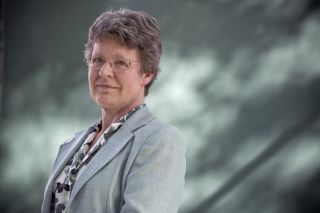 Astrophysicist Jocelyn Bell Burnell, shown here in 2011, discovered the radio pulsar when she was a graduate student.
(Image: © Colin McPherson/Corbis via Getty Images)

Jocelyn Bell Burnell is responsible for one of the most important astrophysics discoveries of the 20th century: the radio pulsar. The discovery, which she made as graduate student, earned a Nobel Prize in 1974. And it could one day form the basis of a "galactic positioning system" for navigating outside our solar system.

But Bell Burnell didn't collect the Nobel. Instead, as NPR reported, the award went to her supervisor at the University of Cambridge, Antony Hewish — who had built the necessary radio telescope with her but didn't discover the pulsar.

Now, 44 years later, Bell Burnell has received the much heftier Breakthrough Prize for the same discovery, and for her scientific leadership in the years since. In 1974, the Nobel comittee gave away about $124,000 to winners (about $620,000 adjusted for inflation). Hewish would have recieved half of that, after splitting the prize with another radio astronomer who won the same year. The Breakthrough Prize, funded by Sergey Brin, Priscilla Chan and Mark Zuckerberg, Ma Huateng, Yuri and Julia Milner, and Anne Wojcicki, comes with a prize of $3 million, making it the largest scientific award in the world. [The 18 Biggest Unsolved Mysteries in Physics ]

Bell Burnell told the BBC that she plans to give the money away, setting up a scholarship to support women and ethnic minorities interested in science.

"I don't want or need the money myself, and it seemed to me that this was perhaps the best use I could put to it," she said in her BBC interview, adding that she believes unconscious bias keeps such groups out of science and that the fact of her own status as an outsider at Cambridge helped her make her universe-unlocking discovery.

"Jocelyn Bell Burnell's discovery of pulsars will always stand as one of the great surprises in the history of astronomy," Edward Witten, the chair of the Breakthrough Prize selection committee, said in a statement. "Until that moment, no one had any real idea how neutron stars could be observed, if indeed they existed. Suddenly, it turned out that nature has provided an incredibly precise way to observe these objects, something that has led to many later advances."