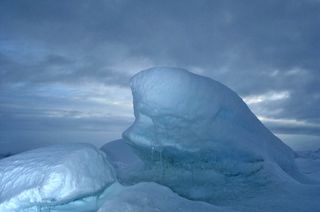 Warm water has penetrated deep into the frozen Arctic.

So far, it's still hiding out far beneath the surface, but according to a new study, there's a serious risk that this warm water could rise and trigger a new wave of melting in the interior of our planet's already shriveled northern ice cap.

Using older data from ships and newer data from permanent probes installed deep in the water, researchers showed that water in the Arctic Ocean's Canadian Basin has warmed significantly in recent years. That's thanks to a circular ocean current called the Beaufort Gyre, which pulls southern water north and under the Arctic's ice, the researchers wrote.

As the planet has warmed, they found, the water delivered north along the Gyre has gotten warmer, too. And once that heat gets to the Arctic Ocean, it gets trapped there, so those permanent probes detect it year-round. [Photos Reveal How Earth's Glaciers Have Rapidly Disappeared]

The trapping effect is the result of the Arctic Ocean's distinct layers of water, said lead study author Mary-Louise Timmermans, a professor of geology and geophysics at Yale University.

"Fresh water's on the top; and salty water's denser, so it's on the bottom," Timmermans told Live Science. "These warm waters, they're saltier. So they're held at depth — insulated" by the layer of colder, fresh water above them.

As the planet rapidly, unnaturally warmed due to climate change and the ice farther south melted, the researchers found, the more southern waters began absorbing sunlight that once would have been reflected back into space by white ice. And that extra energy made its way north under the ice, where it stayed.

This created a source of "archived" heat in the planet's far north, which Timmermans and her co-authors showed has increased steadily each year.

"We had seen [the deep Arctic Ocean] getting warmer with data points here and there, but something we hadn't appreciated before was just the slow and steady, obvious increase in the heat content," she said.

The warmth under the ice hasn't dipped or varied significantly since the 1980s, she added. It's just kept marching upward "like a staircase."

The study shows that climate change doesn't only threaten the Arctic through the direct melting of ice along the northern ice cap's edges, Timmermans said. Instead, all the extra heat now present in our planet presents a long-term threat to the northern ice, independent of year-to-year shifts in weather patterns. Over time, she said, that heat will break through the insulating fresh water above it and eat away at the planet's remaining northern sea ice from within.

The study was published today (Aug. 29) in the journal Science Advances.