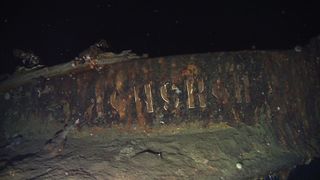 The stern of a recently-found shipwreck that a South Korean company is claiming belongs to the Dmitrii Donskoi Russian warship.
(Image: © Courtesy of Shinil Group)

A South Korean company is claiming that they have discovered a long-sought Russian warship that sank during the 1904-1905 Russo-Japanese war off a Korean Island. They are speculating that the Dmitrii Donskoi ship, could contain $132 billion worth of gold, according to recent news reports.

But South Korean officials are warning investors (who may be looking to pour money into potential stocks in relation to the company), to be leary, as such claims aren't new. Other companies, such as the Dong-Ah Construction, have previously made such claims related to this wreck, seemingly to bump up their stock prices, but ended up going bankrupt, according to the Associated Press.

The company, called the Shinil Group, photographed the stern and various parts of the shipwreck and compared recently taken photos to what they knew about the hull plan of the Donskoi ship, according to a statement. The photo of the stern shows markings that the company claim spell out the ship's name in Russian. They also found 203 mm cannons, 152 mm long-distance guns, some machine guns, anchors, wooden decks and armor, according to the statement. [Sunken Treasures: The Curious Science of 7 Famous Shipwrecks]

Russian scholars have noted in the past that it was unlikely so much gold would've been put on a ship, and that it would've been safer to transport it on a train, according to the Associated Press. Others have said that with all the sailors, artillery pieces and coal on board, there wouldn't have been room for 200 tons of gold. And even if there was room, it's unclear whether it would be worth as much as the company claims, according to the AP.

The Shinil Group hopes to pull out the ship from where it has sunk a quarter mile (400 meters) below the surface, but they haven't yet put in a request to the relevant government agency, according to the AP.

Once they do, laws require the company to deposit 10 percent of the estimated value of the shipwreck before beginning salvaging efforts. If the ship indeed contains $132 billions worth of gold, 10 percent would mean the company must deposit $13.2 billion. The company says it has only discovered the shipwreck, which is worth about $1 million in and of itself, and not the gold inside, so it plans to deposit a little above $100,000, according to the AP.