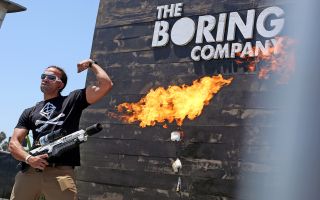 Elon Musk's "Not-A-Flamethrower" flamethrowers are resulting in (you guessed it) a whole lot of fiery folly.

Beginning in January, about 20,000 people shelled out $500 apiece for the propane-fueled devices, sold by Musk's The Boring Company (TBC), according to a statement on TBC's website. The first 1,000 were delivered June 9 to their gleeful owners, and unsurprisingly, they are being used in spectacularly irresponsible ways — many of which were shared on social media.

Some creative applications for the fire makers included grilling steaks, popping popcorn, igniting Tiki torches and even lighting up what appeared to be a massive blunt, Futurism reported. [Watch SpaceX's Elon Musk Play with a Flamethrower (Video)]

Flamethrowers were once used in trench warfare, and today firefighters use the handheld torches for back-burning — creating controlled burns in order to contain a fire by preemptively destroying wood that it would use for fuel, according to the International Association of Wildland Fire.

But many of those who bought TBC's Not-A-Flamethrower had much more frivolous uses in mind, as they all too readily demonstrated.

YouTuber Justine Ezarik (@ijustine) posted a video on June 18 that showed her testing Not-A-Flamethrower in her backyard, cooking hot dogs, an egg, a hamburger, a pan full of popcorn and an entire chicken. At one point in the video, Ezarik remarked, "Who would have thought? Fake grass and flames don't mix," suggesting that she had accidentally set fire to the artificial turf in her yard.

Other Not-A-Flamethrower owners merrily demonstrated how you could use the flamethrower to light a campfire, sear the surface of a crème brulee, or ignite the end of what looked like a giant, hand-rolled blunt.

On June 9, after Musk tweeted repeatedly about the flamethrower pickup event at SpaceX headquarters in Hawthorne, California, Twitter user @SPPhotonic questioned why Musk was not more concerned about fire hazards in California, where record drought has recently contributed to some of the worst wildfires in the state's history.

Musk's response was disappointingly flip. He remarked that fire extinguishers were sold alongside the flamethrowers and promised that a TBC "ice blaster" would be offered "before the dry season starts in winter."

Is the sight of all this flaming foolhardiness sparking your interest in a flamethrower of your own? If it is, Musk and TBC can't help you — Not-A-Flamethrower sales "are now complete," according to the company website. However, you might be able to satisfy your burning desire on eBay, where you can pick up one of the now-defunct flamethrowers for $1,000 to $5,000.