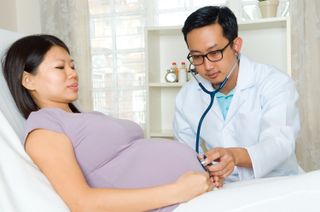 Two newly developed blood tests may help moms-to-be accurately answer this ever-popular question: When is your baby due?

One blood test can predict gestational age and delivery date, while the other can flag some women who are at risk for premature delivery, according to a new study.

However, both tests are still in the beginning stages of research and aren't yet available to the public, according to the study, which was published online today (June 8) in the journal Science.

If these potentially low-cost tests are available for public use someday, they could "hold promise for prenatal care in both the developed and developing worlds," the researchers wrote in the study. That's because about 15 million babies are born prematurely every year worldwide, and in the United States, premature birth is the leading cause of death among newborns, as well as complications later in life, the researchers said. [Blossoming Body: 8 Odd Changes That Happen During Pregnancy]

To perform the tests, scientists took blood samples from pregnant women and then analyzed free-floating genetic material known as RNA within each sample. This RNA comes not just from the mother but also the fetus and placenta and can provide insight on fetal development. In fact, these fragments of RNA can reveal which genes are switched on, indicating which stage of maturation the fetus has reached.

In effect, these noninvasive tests provide a way of "eavesdropping on a conversation" between the mother, the fetus and the placenta, without disturbing the pregnancy, study co-researcher Dr. David K. Stevenson, a professor of pediatrics at Stanford University in California, said in a statement.

In the first experiment, scientists examined 31 healthy pregnant women from Denmark who agreed to donate a blood sample from each week of their pregnancy, the researchers said. All of the women delivered their babies at full term, or after 37 weeks of pregnancy. After analyzing the women's blood samples, the researchers found that RNA fragments corresponding to placental genes, "might provide an accurate estimate of fetal development and gestational age throughout pregnancy," the researchers wrote in the study.

In fact, the predicted due dates from the RNA biomarkers were comparable with those from a first-trimester ultrasound, the researchers said. Even better, this test could be less expensive and more widely accessible than ultrasounds, the researchers noted.

In the second experiment, the researchers looked at 38 pregnant women — recruited by the University of Pennsylvania and the University of Alabama at Birmingham — who had an increased risk of preterm delivery because they had experienced premature contractions or had given birth prematurely before.

This experiment was small and unblinded (meaning the researchers knew which women's samples they were looking at) but had encouraging results: When the researchers looked at a subset of the women, they found that the RNA analysis correctly classified six of eight (75 percent) women who delivered prematurely. Moreover, the same test misclassified just one of the 26 women who carried to full term. (In other words, it predicted that one woman wouldn't carry to full term, but she did.)

When they did the test again on a different group of women within the study, the test accurately predicted 80 percent of preterm births. However, it also misclassified three of the 18 full-term births. These results came from blood samples that were collected two months before the women went into labor, the researchers noted. [9 Uncommon Conditions That Pregnancy May Bring]

"With further study, we might be able to identify specific genes and gene pathways that could reveal some of the underlying causes of preterm birth, and suggest potential targets for interventions to prevent it," Stevenson said.

However, both tests have several limitations at this point. First and foremost, each test needs to be verified in a larger clinical trial that includes diverse ethnicities and is blinded, meaning the scientists won't know which women are at risk for preterm birth, the researchers said.

However, if all goes well, the tests could be a useful, potentially inexpensive tool for both pregnant women and their doctors, the researchers said. The study was funded by the March of Dimes, the Bill and Melinda Gates Foundation and the Chan Zuckerberg Biohub — a research collaboration funded by Facebook CEO and founder Mark Zuckerberg and his wife Priscilla Chan.