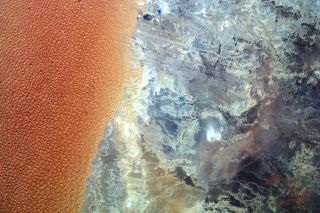 This photo, taken from the International Space Station, shows the sand dunes and dark hills that mark the boundary between Algeria and Libya.
(Image: © Nasa/EarthKAM)

The dramatic contrast between the burnt-orange dunes and the dull-blue hills of the Sahara Desert in northern Africa makes for a stunning view from the International Space Station, as seen in a new image shot from the ISS.

This gorgeous landscape shows the border between Algeria and Libya, which is one of the driest parts of the Sahara Desert, according to NASA's Earth Observatory. For scale, note that the dune portion of the image is about 60 miles (100 kilometers) long.

Large dune fields, such as the one shown here in Algeria, are known to geologists as "ergs" — the Arabic word for giant sandy expanses. This erg, called the Grand Erg Oriental, includes hundreds of bumpy dunes that cover a vast area of about 370 miles by 124 miles (600 by 200 km), the Earth Observatory reported. That's a region larger than 22 million football fields. [Cholla Photos: See these Amazing Desert Cacti]

On the hilly, bluish side of the image, notice the branching waterways. These channels are usually dry, but when it rains they carry the water to the edge of the erg.

The whitish blotch in the hilly terrain is a dry desert lake. The straight lines are human-made roads. In the top middle, the Libyan town of Ghadames, population 10,000, appears as a dark-blue dot. The walled-off town is a United Nations' World Heritage site.

The photo was taken through the window of the ISS by the Sally Ride EarthKAM (Earth Knowledge Acquired by Middle-school students) on Oct. 31, 2017. The astronaut Sally Ride (1951-2012), the first American woman in space, started the program so that middle-school students could ask astronauts aboard the ISS to take pictures of different regions on Earth.