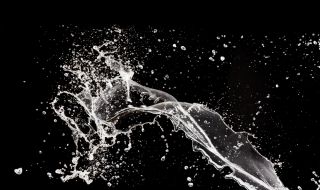 In every glass of water you drink, there are two kinds of H2O. And scientists have shown that they have significantly different chemical properties.

All water molecules are made of a single bulky oxygen atom and two smaller hydrogen atoms, sticking up at angles like Mickey Mouse ears. But those hydrogen atoms can be arranged in two different ways, based on their quantum spin. (Spin is a trait of quantum particles that's a bit like real balls spinning, but involves extra dimensions and can have only one of a few discrete momentums.) In the first kind of water, called "ortho-water," both hydrogens spin in the same direction. In the second kind of water, called "para-water," the hydrogen atoms spin in different directions.

Spin usually affects the behavior of particles only on the minute quantum scale, which has long prevented scientists from separating them for experiments. [The Surprisingly Strange Physics of Water]

This experiment took advantage of water's "polar" nature. Because of water's weird, Mickey Mouse, asymmetrical shape, electrons flow unevenly over its surface. So one side of a water molecule is positively charged, and the other is negatively charged, even when the molecule has an overall neutral charge.

The researchers fired a beam of water molecules through an electric field tuned to push a bit differently on both polar ortho-water molecules and polar para-water molecules, so that they crashed into different little buckets at the end of the beam's path.

Then, the researchers exposed each bucket to supercooled diazenylium molecules — each made up of two nitrogen atoms (on their own, a normal nitrogen molecule) and an extra proton (also known as a proton with no electrons). Diazenylium reacts with water to donate its extra proton to the water molecule, forming H3O+.

Researchers found that para-water reacts 25 percent faster with diazenylium than ortho-water does, likely because of differences in how the spins influence attraction between different molecules.

"To our knowledge, the present study is the first in which rotationally state-selected polyatomic neutral molecules [like water] have been reacted with ions," the team from the University of Basel in Switzerland wrote in their paper published Tuesday (May 29) in Nature Communications.

This experiment, they wrote, represents a major step toward understanding how an abstract physical concept like quantum spin influences the chemical reactions that go on all around us, including inside our bodies.