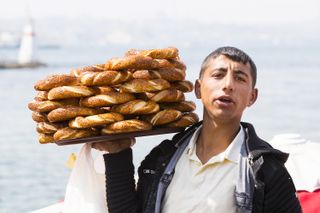 Unlike chocolate chip cookies or tomato soup, the invention of bread can't be pinned down to a single person or people; instead, it evolved to its present state over the course of millennia.

Although the modern version of sliced bread is a fairly new invention (Wonder Bread began marketing the first sliced loaf of bread in 1930), bread itself is an ancient food with origins dating back more than 22,000 years.

In 2004, at an excavation site called Ohalo II, in what is modern-day Israel, scientists found 22,000-year-old barley grains caught in a grinding stone: the first evidence of humans processing wild cereal grains. But these early "bread" creations were probably more like "flat cakes of ground seeds and grains heated on a rock, or in the embers of a fire," than standard sandwich bread, Howard Miller, a food historian and professor at Lipscomb Universityin Nashville, Tennessee, told Live Science. [Why It Took So Long to Invent the Wheel]

Bread grains, the first plants to be domesticated, were first harvested in the wild by the Natufians. This Mesolithic group of hunter-gatherers lived in the Jordan River Valley region of the Middle East about 12,500 years ago.

"The Natufians are thought to be the first people to make the transition between survival purely on foods that you harvest from nature to becoming farmers who control all aspects of the food supply," William Rubel, a food historian and author of "Bread: A Global History" (Reaktion Books, 2011), told Live Science. "The Natufians had the infrastructure for grinding barley and then making it into bread."

The Natufians had the earliest known agricultural-based society and would process grains into a coarse flour, from which they made a "small, pita-like, unleavened loaf cooked directly on the coals of a fire," Miller said.

Over the next several thousand years, agriculture and the cultivation of grains spread across the Middle East and southwest Asia through trade contacts with other hunter-gatherer peoples in the Nile Valley, Mesopotamia and east of the Indus Valley.

"Bread was the evolutionary spark that led to the development of state and large political units," Rubel said. "Bread allowed for the accumulation of surplus, and so the villages got bigger until you had actual cities."

"Bread was the majority of their calories," Rubel said. "Bread allowed for the building of surpluses and developing of [social] classes. You didn't have a class of full-time artisans until you had bread."

The first-known leavened bread made with semi-domesticated yeast dates back to around 1000 B.C. in Egypt, according to Miller. However, scholars debate the exact origin, as evidence suggests that Mesopotamians also produced yeast-risen bread, Rubel said.

In fact, the invention of yeast-risen bread likely has boozy roots. Ancient Egyptians used barley and emmer wheat both to brew sour beer and to make sourdough bread, according to a 1994 study in the journal Egyptian Archeology. The ancient Egyptians could have made beer by baking "richly yeasted dough" into "beer loaves," then crumbling that bread and straining it with water, which would then ferment into beer, according to the book "Ancient Egyptian Materials and Technology" (Cambridge University Press, 2000).

From the cradle of civilization's flatbreads to the packaged supermarket slices we know today, bread has evolved alongside society, ever since humans first crushed grains against a grinding stone thousands of years ago.