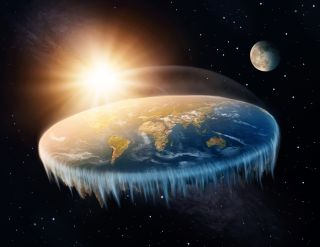 Most believers in a flat Earth think the planet is a flat disk surrounded by an ice wall.
(Image: © Getty)

More than 200 flat-Earth enthusiasts descended on West Midlands, England, this past weekend to "engage freely in deep and meaningful discussions," according to the Flat Earth Convention UK.

The Earth's glorious globular-ness was proved more than 2,000 years ago by the ancient Greeks, but there's a small subset of people who think the planet is a disk despite enjoying the downward pull of gravity that could only result from living on a sphere.

At this conference, they were presenting their scientific evidence for such a disk. One of the more interesting pieces of evidence came from speaker Darren Nesbit, who referred to the "Pac-Man effect" as the reason why planes don't fall off the edge of a flat Earth, according to the science news website Physics-Astronomy.org. When a plane or other object reaches the edge of the horizon, such as when Pac-Man reaches the end of the screen, that object will teleport from one side of the planet to the other, a la Pac-Man entering from the other side of the screen. [7 Ways to Prove the Earth Is Round]

According to the group that put on the convention, the gathering also included some "alternative viewpoints." (You think?)

"In conjunction with a select number of well-known flat-earth speakers, we have also provided some alternative viewpoints. We truly hope that new friendships are forged, ideas and experiments are brain stormed and future actions are set in motion," they state on their website.

Among the nine speakers were Nesbit, a musician who became interested in flat-Earth beliefs in 2014; Dave Marsh, a manager with England's National Health Service; and Gary John, an independent flat-Earther who put on the convention.

Marsh was one of four speakers who are associated with the flat-Earth research group called FEcore. His research focuses on the moon, "as he believes it is the key to unlocking the globe earth deception," according to the convention website.

He studies the speed of the moon across the night sky. (Flat-Earthers believe the moon and sun orbit around Earth's North Pole.) "My research destroys big bang cosmology," he said, according to Physics-Astronomy.org. "It supports the idea that gravity doesn't exist and the only true force in nature is electromagnetism."

Another speaker, Martin Kenny, purports to have broader views of a flat Earth than other believers. "It is my innerstanding that there are other lands, dimensions and civilizations yet to be discovered across and within the plane of our Earth. The whole earth consists of 4 concentric rings of land, each ring having its own sun and moon, which would be our wandering stars," he says on the convention website.

Flat-Earthers like Kenny agree that the planet is a flat plane, though they have varied ideas for the disk's particular layout. Many seem to think the Earth is a disk surrounded by an ice wall and that those who show evidence to the contrary — including NASA, with its many satellite pics beamed down of our blue marble — are fakes. These conspiracy theorists believe NASA and others are trying to keep this secret from the public. [101 Images of a Round Earth Taken from Space]

As for how many people buy into this clearly mistaken belief, that is unknown. However, the oldest flat-Earth organization, the Flat Earth Society, claims to have 555 registered members as of August 2016. According to the society's website, the group was founded by an English inventor named Samuel Birley Rowbotham in the 1800s.

In addition to the Q&A's with the nine speakers at the three-day convention, there was apparently a talk entitled "Heliocentric v Geocentric experts Debate." The convention's site doesn't indicate who was debating these two views, one proved ages ago, and the other suggesting Earth is fixed in space with the universe revolving around it.

This isn't the first flat-Earth convening. In November 2017, the Flat Earth International Conference was held in Raleigh, North Carolina. That convention hosted some big-name (in flat-Earth circles, at least) speakers, such as founder of the Flat Earth Clues series on YouTube, Mark Sargent, who thinks we are all locked inside a "Truman Show"-like dome structure. The next FEIC is scheduled for Nov. 15 -16 in Denver.

We hope you don't fall off the planet before then.