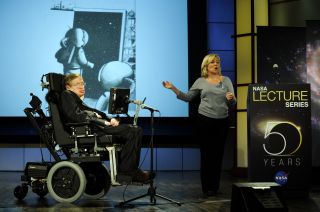 Professor Stephen Hawking speaks about why humanity should expand out into space for the NASA Lecture Series on April 21, 2008.
(Image: © Paul Alers/NASA)

Stephen Hawking will spend eternity in the company of some other tremendously influential English scientists.

The cosmologist and science communicator, who died March 14 at age 76, will have his ashes interred in Westminster Abbey later this year, officials with the famous London church announced today (March 20).

"It is entirely fitting that the remains of Professor Stephen Hawking are to be buried in the Abbey, near those of distinguished fellow scientists. Sir Isaac Newton was buried in the Abbey in 1727. Charles Darwin was buried beside Isaac Newton in 1882," the Dean of Westminster, the Very Reverend John Hall, said in a statement. [Stephen Hawking: A Physics Icon Remembered in Photos]

"Other famous scientists are buried or memorialized nearby, the most recent burials being those of atomic physicists Ernest Rutherford in 1937 and Joseph John Thomson in 1940," Hall added. "We believe it to be vital that science and religion work together to seek to answer the great questions of the mystery of life and of the universe."

Abbey officials did not specify the date of interment. Hawking's family will hold a private funeral service for him on March 31 at Great St Mary's, the church for the University of Cambridge, the BBC reported. Hawking did his graduate work at Cambridge and was based at the university for decades thereafter.

Hawking revolutionized scientists' understanding of black holes, showing that these mysterious objects actually emit radiation and can therefore evaporate over long enough timescales. He did this by melding Einstein's general theory of relativity with quantum mechanics, in a way that had never been done before. (By the way, Hawking's death date forged another connection with Einstein, who was born on March 14, 1879.)

Hawking tackled many other big and important questions during his long career. For example, he and collaborator Roger Penrose postulated that the universe began as a singularity, a point of infinite density similar to the environment at a black hole's heart.

Hawking also communicated scientists' evolving view of the universe's nature and history to the public, in a number of best-selling popular-science books. And he did all of this while battling amyotrophic lateral sclerosis, also known as Lou Gehrig's disease, which robbed Hawking of most of his motor function over the years. For the last decade of his life, he communicated by twitching his cheek muscles, the motions of which were picked up by a special sensor.