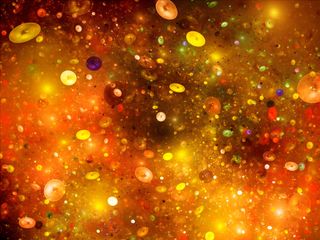 Stephen Hawking's "no boundary" model ultimately posits that our humble universe is just one of infinitely many parallel universes.
(Image: © Shutterstock)

A few months before physicist Stephen Hawking died, he published a paper that several media outlets touted as a way to finally prove (or disprove) the existence of parallel worlds.

But that claim may be a bit of cosmic inflation, said several physicists who were not involved in Hawking's research.

"The paper makes no statements about observational tests. It's not entirely uninteresting, but it's one of literally several thousand ideas for what might possibly have happened in the early universe" many of which include parallel worlds, said Sabine Hossenfelder, a physicist at the Frankfurt Institute for Advanced Studies in Germany, who blogs at backreaction.blogspot.com. [The 18 Biggest Unsolved Mysteries in Physics]

The study, by Hawking and Thomas Hertog, a physicist at the Catholic University Leuven (KU Leuven) in Belgium, first appeared in the preprint journal arXiv in July 2017 and was modified just a week before Hawking passed away. The study is an attempt to isolate the types of universes predicted by one of Hawking's unproven theories, the "no boundary" model to explain the Big Bang.

However, it relies on several speculative and unproven theories and uses them in bold ways to make vague conclusions, said Frank Wilczek, a Nobel laureate and theoretical physicist at MIT.

The roots of the paper go back to on of Hawking's best-known, yet unproven theories: the "no boundary proposal" to explain the Big Bang. According to Einstein's theory of general relativity, before the Big Bang, there must have been a singularity, or an infinitely dense, extremely hot speck of matter for which the laws of physics break down.

In this conception, which was formulated with University of California, Santa Barbara physicist James Hartle, this singularity was one in both space and time ­— meaning that before the Big Bang, time as we know it didn't exist. Try to visualize the universe in time then, and it is as if it had no boundary — like a globe that can be traversed over and over without reaching an edge.

As scientists analyzed the idea, they realized that Hawking's no-boundary theory predicts that this baby universe, as it inflated super fast, would pop off other universes and ultimately an entire multiverse. In fact, Hawking's theory ultimately posited that our humble universe is just one of infinitely many parallel universes that exist in this infinite, fractal-like multiverse. This multiverse would then lead to a paradox: Because there would be an infinite number of universes, no one would be able to make any testable predictions about the particular universe we happen to live in, Hertog told Live Science in an email. (With an infinite number of possibilities, anything becomes possible, and no particulars about a universe could be determined.) [Top 5 Reasons We May Live in a Multiverse]

"Hawking was not satisfied with this state of affairs," Hertog told Live Science in an email. "'Let's try to tame the multiverse,' he told me a year ago. So we set out to develop a method to transform the idea of a multiverse into a coherent testable scientific framework."

To cut down the infinite number of parallel worlds, the researchers had to find a bridge between the quantum physics that dominated the teensy-tiny singularity of the fetal universe and the classical laws that govern the big universe we all live in. In the new study, Hawking and Hertog used a method known as holography to unite the two sets of ideas. By doing so, they were able to cut this vast forest of multiverses into a countable number. Once they were working with a finite number of universes, they could make predictions about what these universes would look like, Hertog said.

For instance, "they find that universes which are smooth and like our own, basically, are probable," Hossenfelder told Live Science.

Hawking's no-boundary theory posits that after the Big Bang, the universe went through a burst of rapid expansion called cosmic inflation, amplifying the primordial gravitational waves that emanated from the Big Bang, Hertog said. This ancient echo of the universe's birth is recorded in the faint, cold microwave radiation that permeates every region of our universe, known as cosmic microwave background radiation (CMB). If future satellites show that the energy signal in the CMB data matches the inflation predicted by Hawking's model, it could conceivably provide strong evidence for the existence of a multiverse, Hertog said.

But other scientists are skeptical. There are other models of inflation, and most of these models also include some primordial gravitational waves, said Katie Mack, a cosmologist at North Carolina State University who was not an author on the new paper.

"The ideas brought up in this paper are not giving any new kind of signature that's different from other models of inflation," Mack told Live Science.

In other words, there's no way for CMB data to reveal whether Hawking's theory, or one of thousands of others, is right.

On the other hand, if the CMB signals do not match Hawking and Hertog's predictions, "that would falsify the very specific set of assumptions and approximations used in the paper," Wilczek told Live Science in an email. "So it's testable in that very weak sense," he added.

What's more, Hawking and Hertog relied on a mathematical framework to connect quantum theory and gravity, but that framework relies on a number of unproven conjectures and is, essentially, not complete, Mack told Live Science.

"What they've done in this paper is to use what they call a toy model — it's not fully rigorous and complete," Mack said. "They admit that there's a lot more work to be done."

Before anyone can say that this paper is valid, scientists need to have a better theoretical understanding of quantum gravity, Mack said, referring to a unified theory that unites both quantum mechanics and gravity as described by Einstein's theory of relativity.