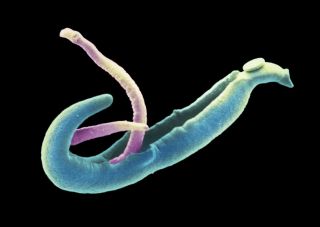 At a university hospital in the Netherlands, 17 students have a tropical parasitic disease.

But these individuals aren't travelers who recently returned from parts of the world where the parasite, a type of worm called a schistosome, is common. Instead, they're volunteers.

According to The New York Times, the 17 individuals volunteered to be infected with the worms as a part of research into a vaccine that could prevent the parasitic infection called schistosomiasis or bilharzia. [8 Awful Parasite Infections That Will Make Your Skin Crawl]

The research is taking place at Leiden University Medical Center in the Netherlands, the Times reported on March 1. In exchange for $1,200, each volunteer was infected, through the skin, with 20 worm larvae. Because the larvae were all male, they can't reproduce inside their hosts, ensuring that the population won't increase beyond 20 per person.

Then, after eight weeks — during which the volunteers will be carefully monitored — the doctors will give the patients an anti-parasitic drug meant to wipe out the worms, and the study will be over.

The current trial isn't meant to test how well a vaccine works, according to the Times. Instead, the researchers want to see if infecting volunteers is a viable way to test future vaccines. Traditionally, vaccines are tested in parts of the world where the infection is common, and the drugs would be given to people already exposed to the disease.

The goal of the Dutch trial, therefore, is to demonstrate a way around that traditional path of testing vaccines. It aims to show that there could be an easier way to test the vaccine in people, and specifically, people who volunteered to safely be infected.

Schistosoma worms, also known as blood flukes, infect more than 200 million people worldwide, mostly in tropical and subtropical regions, according to the Centers for Disease Control and Prevention (CDC).

The infection occurs when the worm's larvae, which live in freshwater snails, get into a person's skin, according to the World Health Organization (WHO). Once inside a human body, the worms migrate to the blood vessels, where the parasites take up residence, the CDC says.

Symptoms are caused by the body's reaction not to the worms but to the worms' eggs, which are released by the females (in the Dutch study, only male worms were given to the volunteers), the WHO says.

These symptoms vary depending on where the worms congregate in the body; four of the five species affect the intestines, leading to symptoms such as diarrhea and abdominal pain; the remaining species affects the urogenital tract and can lead to blood in urine, pain and fertility problems, according to the WHO.

Praziquantel, an anti-parasitic medication, is used to treat schistosomiasis, according to the CDC.