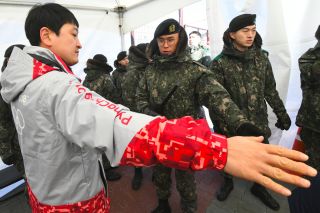 South Korean soldiers inspect a visitor at a security checkpoint as they replace security guards showing symptoms of the norovirus on Feb. 6 ahead of the 2018 Winter Olympics.
(Image: © Jung Yeon-Je/AFP/Getty)

There's an added challenge at the 2018 Winter Olympics, according to news reports: an outbreak of norovirus.

More than 40 security guards have fallen ill with the stomach bug, The Washington Post reported yesterday (Feb. 6). In an effort to stop the spread of the virus, more than 1,200 people have been quarantined while they are tested for the disease, according to the Post.

The highly contagious stomach virus, which causes diarrhea and vomiting, is notorious for spreading easily at close-quarter events, Live Science previously reported, including on cruise ships and at conventions.

One reason that norovirus is so contagious is that the symptoms — including vomiting — come on very quickly, Dr. Amesh Adalja, a senior scholar at the Johns Hopkins Center for Health Security in Baltimore, told Live Science in 2016. That means that people may vomit in places they normally wouldn't, thereby spreading virus particles to others, Adalja said.

What's more, these particles can survive for days outside the body, he added.

And it doesn't take much to get a person sick: Coming into contact with as few as 18 norovirus particles can make a person ill, according to the Centers for Disease Control and Prevention (CDC). Once infected, a person can shed billions of these particles, the CDC says.

The Pyeongchang Organizing Committee is investigating the source of the virus and how it spread, according to The Washington Post. The security guards who fell ill were all staying at a youth center in the mountains near Pyeongchang, the Post said.