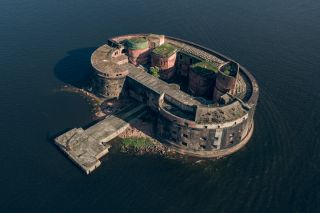 With water lapping at its curved, worn stone walls and vegetation spreading on its roof, Fort Alexander looks like the kind of place with an eerie history.

This water-bound, bean-shaped fort, built on an artificial island near St. Petersburg, Russia, was once the site of a research laboratory focused on the study of the plague. Two staff members were accidentally infected with the plague and died. The place is now often called "the Plague Fort" in dubious honor of this history.

The fort is now empty, but it occasionally makes forays into the public eye. It was most recently the subject of a Reddit thread in a forum dedicated to photographs of abandoned buildings. In 2016, drone footage of the fort shot around the internet.

The fort was constructed over a period of seven years, built on a platform of sand, concrete and granite that sat on the floor of the Gulf of Finland, according to Atlas Obscura. It was built to protect the strategically important gulf, though it never saw actual battle.

A place for plague

The real fight inside the walls of Fort Alexander was against the plague. Yersinia pestis, the bacterium that causes the plague, was discovered in 1894. Within a few years, Russia set up a plague lab at Fort Alexander to study the Black Death-causing pathogen and develop a vaccine.

An essay written in 1907 describes the lab animals inoculated with the plague in order to extract their blood serum to develop plague treatment and preventatives: rabbits, guinea pigs, monkeys, even horses. In 1904, the head doctor, VI Turchinovich-Vyzhnyevich, contracted the plague and died, according to the essay. In 1907, another doctor, Emanuel F. Schreiber, fell ill. He was sick for three days, diagnosing himself with the pneumatic, or respiratory, form of the plague. (According to the World Health Organization, the pneumatic plague is almost always fatal unless treated with modern medicine within 24 hours of symptoms appearing.) Schreiber was cremated on-site so that his remains wouldn't spread the deadly bacteria.

As recounted in the 1907 essay, another doctor, Lev Vladimirovich Podlevsky, came down with the plague within days of Schreiber's death. But Podlevsky was lucky (relatively). He contracted the bubonic form of the plague, so named because of the distinctive lumps, or buboes, that appear on lymph nodes during an infection. Today, bubonic plague kills between 30 and 60 percent of its victims when untreated, according to the World Health Organization.

Podlevsky was treated with an experimental plague serum developed by the lab. He eventually recovered.

The isolated lab was later used to study other infectious diseases, including cholera and tetanus, according to Atlas Obscura. The lab shut down in 1917, and the Russian navy used the fort as a storage facility until it was abandoned in the 1980s. According to Atlas Obscura, it then became a popular place for illegal, unpermitted raves.

The curious traveler no longer has to trespass to reach this abandoned outpost, though. Today, boat tours are available to take sightseers to the fort.