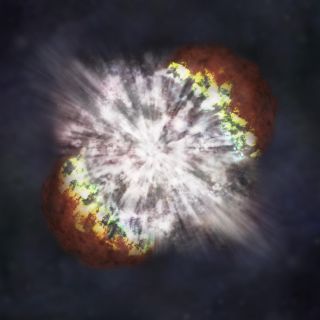 Things spread out. They cool down, disintegrate and die. Disorder is going to kill the universe. Chaos increases. It's everywhere, and it's growing. Scientists know this.

And yet, researchers have now demonstrated that there are certain circumstances in which disorder is beat back briefly. In a paper published Nov. 9 on the online preprint journal arXiv, researchers showed that heat could briefly flow from a cold atom to a hot one inside a chloroform molecule, locally reversing the normal flow of the universe.

What does it mean for disorder to govern everything?

Stir milk into coffee, and the brown mixture will never separate on its own back into its constituent fluids. Build a sandcastle on the beach, and within an hour or two, it'll disappear under the waves. Live a long life, and eventually the body's precisely ordered internal systems will fail.

This constant increase in entropy, or tendency for ordered things to become disordered, isn't just a habit of the universe — it's one of the known world's fundamental rules, enshrined as the second law of thermodynamics. One of the most basic demonstrations of the ruling disorder involves heat. Drop an ice cube into boiling water, and the speck of heat in the cube won't add to the water's heat. Instead, heat will flow from the hot water into the cool ice. The ice will melt, and the water will cool down. [Twisted Physics: 7 Mind-Blowing Findings]

Of course, order can be built from disorder. Air conditioners cool down an apartment on a hot day. Chunks of silicon, aluminum and loose sand emerged from mines and were transformed into the microchip, device chassis and screen used to read this article. Oil bubbles in the hot baths of the early Earth gave rise to the full spectacle of organic life.

But in each of these so-called open systems, some external source of energy made that local act of organization happen. A pump drew power from an electric plant to push hot air outside, humans mushed up food into bodily fuel which they used to haul resources out of mines and reshape them, the sun bathed the planet in life-giving heat as it slowly burned through its fuel reserves, which will one day run out and dissipate. View the so-called closed system in its totality, with no energy being pumped in, and the trend is still toward disorganization.

But are there any cases in which this isn't true? The short answer: When the initial conditions of the closed system are weird — quantum-mechanically weird — then the situation can be reversed.

The complete answer: When two atomic nuclei inside a chloroform molecule have the same spin, but different temperatures, heat can flow from the colder nucleus to the hotter nucleus.

Spin is a quantum mechanical feature of atomic particles, measured in multiples of one-half. Two particles in a system can be correlated, meaning they share physical information — a narrower version of the effect that occurs during quantum entanglement — by aligning their spins.

In the new study's experimental setup, researchers observed two kinds of chloroform, a molecule made up of one carbon nucleus linked to a hydrogen nucleus and three chlorine nuclei. The researchers used a technique called nuclear magnetic resonance.

The first chloroform sample had hydrogen and carbon atoms with uncorrelated spins, but the hydrogen was hotter than the carbon. Over a very short time, heat flowed from the hydrogen to the carbon, as predicted by thermodynamics.

But when the hydrogen and carbon spins were correlated, heat flowed in the opposite direction — from the cool carbon into the hot hydrogen. In effect, the researchers wrote, they "reversed the arrow of time," creating a closed system in which entropy spontaneously decreases.

"We observe a spontaneous heat current from the cold to the hot spin," the authors wrote, "and show that this process is made possible by a decrease of the mutual information between the spins."

In other words, the heat flows against the normal current of entropy, but the correlation between the atoms that makes that paradoxical flow possible breaks down as the reverse flow happens.

Does this violate the second law of thermodynamics?

The counterintuitive heat flow in this experiment does violate the second law as it's classically stated: Heat always flows from a hot place to a cool place, according to that formulation.

But scientists have known for a long time that the world is more complicated than that. A more complete statement of the second law goes like this: The known universe is so well-ordered, it's overwhelmingly likely to tend toward disorder. When a bright, massive sun is shining in a dark void, the universe is very uneven,. That difference in energy and mass is a sign that something unusual is going on — an imbalance has appeared that the second law will seek to flatten out.

In other words, the universe is already so low in disorder that the tendency is toward more disorder, but a system without that precondition wouldn't necessarily tend toward entropy. A 2008 arXiv paper examining how quantum correlations complicate entropy quotes the 19th-century physicist Ludwig Boltzmann, who stated that "the universe, considered as a mechanical system … started from a very improbable state, and is still in a very improbable state."

But the relationship between two correlated atoms isn't a typical feature of that "improbable," low-entropy environment, those 2008 researchers wrote, and operates according to an unusual set of rules without violating the second law. Those rules are temporary by nature, though. As this recent experiment demonstrates, the correlation that makes the reverse heat transfer possible is destroyed by that transfer even as it happens.

"The arrow of time," the researchers wrote, meaning the normal, one-directional flow of entropy, "is not an absolute but a relative concept that depends on the choice of initial conditions."

And with this more nuanced understanding of the second law intact, the universe still tends toward chaos. The correlations between particles are temporary, the experimentalists wrote, and dissipate within milliseconds even as they enable these unusual heat flows. This way, the heat death of the universe still comes.

Editor's Note: This article was updated to change "silicone" to "silicon."