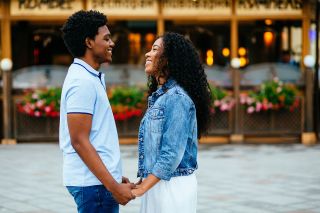 Can you fall in love with someone the very first time you see them?
(Image: © Iryna Inshyna/Shutterstock)

We've all seen that movie moment when two strangers meet and feel an instant romantic connection — in fact, "love at first sight" has been a mainstay of literature for thousands of years, and people in real life often claim to experience a similar spark.

But is that feeling actually love? Not quite, according to the authors of a new study.

In the study, researchers investigated whether people feel love at first sight — LAFS — or whether they believe retroactively that they felt that way, once they've already formed an attachment to a romantic partner. The scientists also questioned whether what people call "love" at a first encounter is truly representative of the complex emotions that make up love — or just a powerful physical attraction. [13 Scientifically Proven Signs You're in Love]

Prior studies have shown that being in love activates certain brain regions, and the location of the activity can vary depending on what type of love the person is feeling, such as emotional, maternal or passionate love. Intense, passionate love activates the same networks in the brain as addiction does, and more long-term love sparked responses in brain regions associated with attachment and reward.

Researchers have also previously reported that as many as 1 in 3 people in Western countries claim to have experienced LAFS. And that the feeling is associated with more passion and stronger bonds within the relationship, the scientists wrote in the new study.

But there was little evidence indicating if LAFS occurred when people thought it did — at the moment of their first meeting ― or if they merely remembered it happening that way through the lens of their current romantic feelings, the study authors explained.

The scientists collected data from about 500 encounters between nearly 400 participants, mostly heterosexual Dutch and German students in their mid-20s. Using three stages of data collection — an online survey, a laboratory study and three dating events lasting up to 90 minutes each — the researchers gathered information from their subjects about meeting prospective romantic partners. They noted whether participants said that they felt something akin to LAFS upon a first meeting, and how physically attractive they ranked the person who inspired those feelings.

To define what qualified as "love," subjects submitted self-analysis of several key components: "eros" (physical attraction), "intimacy," "passion" and "commitment." During the tests, 32 different individuals reported experiencing LAFS a total of 49 times — and that observation wasn't typically accompanied with high ratings for love components such as intimacy and commitment.

However, reports of LAFS did correspond with a potential partner scoring higher as physically attractive, the researchers discovered. About 60 percent of the study participants were women, but men were more likely to report feeling LAFS "on the spot," the study authors reported. And in every case, their experience of LAFS was unreciprocated, suggesting that mutual, instantaneous LAFS "might generally be rare," according to the study.

The authors determined that LAFS was, in fact, merely "a strong initial attraction" that people identified as love, either at the moment they felt it, or in retrospect. And though some study subjects who were already involved with someone reported that they fell in love at first glance, it's hard to say for sure if that happened the way they remembered. Answering this question would require further investigation into romantic relationships, to see how those initial, powerful feelings of instantaneous love play out over time, the scientists wrote.

The findings were published online Nov. 17 in the Journal of the International Association for Relationship Research.