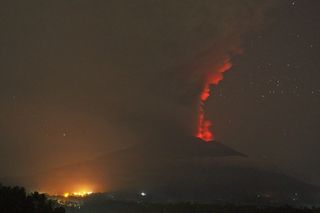 Black smoke and red light are seen at the peak of erupting Mount Agung, from Rendang village of Karangasem, Bali, Indonesia, on early morning of November 28, 2017. The government increased the volcano alert to highest level in 7 kilometer radius range of Mount Agung and extend the closure of I Gusti Ngurah Rai International Airport, Bali.
(Image: © Credit: Mahendra Moonstar/Anadolu Agency/Getty)

A Balinese volcano that has been spewing huge columns of ash in tiny eruptions over the past week could be facing the "big one" very soon, experts now say.

"The potential for a larger eruption is imminent," Indonesia's Volcanology and Geological Disaster Mitigation Center, said in a statement.

Gede Suantika, a senior volcanologist with the state's Volcanology and Geological Disaster Mitigation Center, said the major eruption could be coming within hours, although it's impossible to say for sure, the the New Zealand Herald reported.

Mount Agung, on the Indonesian island of Bali, has been rocked by small eruptions that rained ash clouds. But in the last week, Mount Agung blew steam, a sign volcanologists say means that the magma is heating and instantaneously vaporizing groundwater, Live Science previously reported. Yesterday, a sludgy, cold form of lava known as lahar appeared – a hint that a magmatic eruption was imminent, the New Zealand Herald reported. And late Monday (Nov. 27),  a glowing red arc of magma shot across the sky above the towering volcano, reaching nearly two miles (3 kilometers) in height, the Guardian reported. The glowing magma show increases the chances that a major magmatic eruption is imminent, volcanologists told The Guardian.

The 10,305-foot-tall (3,140 meters) volcano began rumbling to life in September. On Sunday, the country's Volcanology and Geological Disaster Mitigation Center raised Indonesia's aviation threat level to red, the highest possible level, and the Denpasar International Airport in Bali was closed.

If Mount Agung does blow, it could send fast-moving clouds of rocky debris and poisonous gas down the mountainsides, known as pyroclastic flows. The last time the mountain erupted, in 1963 and 1964, more than 1,000 people in surrounding villages died.