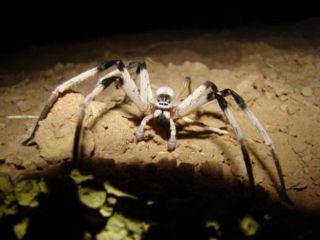 A new spider species discovered in the Middle East is the largest of its type, but its habitat is endangered.
(Image: © Yael Olek, University of Haifa)

With a lanky legspan of up to nearly a half foot, a newly discovered spider species is the largest among its family of arachnids in the Middle East.

The spider, now dubbed Cerbalus aravensis, was discovered in the dunes of the Sands of Samar in the southern Arava region in Israel by a team of biologists from the University of Haifa-Oranim. The scientists say C. aravensis is nocturnal and mostly active during the hottest months of the year.

It constructs underground dens that are sealed off with a lifting door made of sand particles that are glued together to camouflage the living quarters. The spider's legspan is estimated to be about 5.5 inches (14 cm).

But its home is disappearing. The Sands of Samar are the last remaining sand dune in Israeli territory in the southern Arava region. In the past, the sands stretched across some 2.7 square miles (7 square km), but due to the rezoning of areas for agriculture and sand quarries, the sands have been reduced to about 1 square mile (3 square km).

According to Uri Shanas, the Israel Land Administration plans to renew mining projects in the Sands of Samar in the near future, which will endanger the existence of the newly discovered spider.

"The new discovery shows how much we still have to investigate, and that there are likely to be many more species that are unknown to us," Shanas said. "If we do not preserve the few habitats that remain for these species, they will become extinct before we can even discover them."