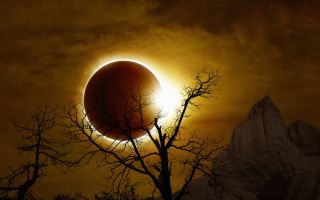 People may reject the science of climate change and vaccines, but they readily believe scientists about solar eclipses.
(Image: © Igor Zh./Shutterstock)

If you've been paying attention, you know that on Aug. 21, we're in for a special cosmic treat: the Great American Eclipse of 2017.

The moon's shadow will track a 4,000-kilometer course across the continental United States from coast to coast, beginning with Depoe Bay, Ore., and end after 93 minutes in McClellanville, S.C.. As a result, tens of millions of Americans will be treated to that rarest of natural wonders: a total eclipse of the sun.

Canada, unfortunately, won't experience a total eclipse, but the view will still be impressive: The sun will be 86 per cent eclipsed in Vancouver, 70 per cent in Toronto, and 58 per cent in Montreal. Canadians who want to experience totality from the comfort of home will need to wait until April 8, 2024 (Hamilton, Montreal and Fredericton), Aug. 23, 2044 (Edmonton and Calgary) or May 1, 2079 (Saint John and Moncton).

In the meantime, back here in 2017, everyone is focused on Aug. 21. Under the path of the eclipse, schools will be closed, traffic will be a nightmare, and hotel rooms at the Days Inn are on offer for $1,600 a night.

What is remarkable among all this excitement and frenzy is the lack of "eclipse deniers." Nobody doubts or disputes the detailed scientific predictions of what will happen.

I will be watching the eclipse from Simpson County, Ky., where I expect I will be joined by thousands of others, all of us knowing in advance that totality for us will begin at 1:26:44 p.m., and will end 141 seconds later. It is inconceivable to any of us that the predictions will be wrong by even a single second.

Not one person will argue beforehand that the jury is still out on eclipses, that scientists have tampered with the data, that eclipses are faked by NASA, that exposing children to eclipses causes autism or even that eclipses are a Chinese hoax. Across the continent, there will be climate deniers, creationists, anti-vaxxers and flat-Earthers looking upwards through their eclipse glasses, all soaking up this wondrous moment along with everyone else.

This presents a puzzle: Why do people distrust or dispute so many aspects of science, but unanimously accept, without question, the ridiculously specific predictions on offer for every eclipse?

Why the selective denial of science?

One possible reason is that we've been right on eclipses every time before. But for most people, a total eclipse is a once-in-a-lifetime experience. Most people won't have experienced such predictions first hand, and will have to take it on trust that what's happened before for others will happen again for them.

Another explanation might be that, unlike the case for climate change or vaccinations, the science behind eclipses is simple and uncontroversial. While it's true that astronomers have been making reasonably accurate eclipse predictions for thousands of years, the required calculations are highly complex, extending far beyond the mathematics covered in high school or even in many university courses. Most people would find it difficult to reproduce or confirm any of these eclipse predictions for themselves.The more likely answer is that eclipses are not a threat. There is nothing at stake. Eclipses do not endanger our way of life or our standard of living. Nobody fears that eclipses might have economic implications, could challenge our belief system or threaten our children. There are no anti-eclipse lobby groups trying to set the narrative, and there are thus no well-funded advertising campaigns or scientific studies that aim to raise doubts in our minds or to subtly shape our thinking.

Eclipses are agenda-free. The science — and the resulting extraordinary experience — are left to speak for themselves.

The problem is that we don't get to pick and choose what scientific facts or consensuses are controversial, and which are not. The same strict laws of science are everywhere.

So if you're comfortable putting down your non-refundable deposit for your eclipse hotel, if you let a steel tube flying at 30,000 feet carry you to a town under the path of totality, if on the morning of Aug. 21 you check the weather forecast hoping for clear skies, if you pay for breakfast with your credit card, and if that afternoon you snap a picture of the eclipse with your smartphone, then you have staked your bank balance, your August vacation and your very life on the fact that science is testable and reproducible, and that faulty theories can't withstand extended scrutiny and testing.

Total solar eclipses are a strange cosmic coincidence and a remarkable, awe-inspiring experience. But they are also a profound reminder that when the emotions, money and politics are stripped away, none of us, at our core, are science deniers.