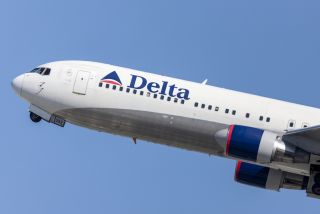 When a traveler unexpectedly tried to open a plane's exit door at cruising altitude during an international flight last week, it took a crowd of passengers and the brute force of smashing two wine bottles over his head to subdue him, according to news reports.

But perhaps unbeknownst to them, the passengers and plane crew also had physics on their side, an expert told Live Science.

Even if the man had been left to his own devices, he would have needed to exert more than 23,700 lbs. (10,700 kilograms) of force to open the door — equivalent to lifting 4.5 Humvees or nearly two African elephants. [5 Real Hazards of Air Travel]

The incident began when the man, identified as Joseph Hudek IV from Tampa, Florida, tried to open the exit door about an hour into a Delta Boeing 767 flight from Seattle to Beijing on July 6, according to an affidavit from the FBI. However, it appears that the man didn't have a full grasp of the physics of his situation.

The pressure inside a typical plane cabin never falls below that found 8,000 feet (2,400 meters) above sea level, said John-Paul Clarke, a professor of aerospace engineering and the director of the Air Transportation Laboratory at the Georgia Institute of Technology. Clarke was not involved with the Delta flight.

"The bottom line is that above 8,000 feet, the pressure inside is higher than the pressure outside," Clarke told Live Science in an email.

"You literally have to pull it inwards, turn it in some way and then push it outside" to open it, Clarke said.

That's a lot of force, as much as the weight of almost 30 grand pianos or nearly six adult male hippopotamuses. [15 of the Largest Animals of Their Kind on Earth]

Below that altitude, there is either a slight or no pressure difference between the inside and outside of the plane, "so it is much easier to pull the door open, as you would on the ground," Clarke said.

In last week's incident, the pilot turned the plane around and landed at the Seattle-Tacoma International Airport, where Port of Seattle Police Department officers apprehended Hudek, according to the FBI.