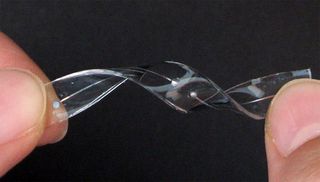 The bendable antenna consists of liquid metal injected into tiny channels within the silicon elastomer. The antenna can be deformed and snap back to its original shape.
(Image: © Ju-Hee So, North Carolina State University)

Tiny antennas that can bend, twist and stretch, before snapping back to their original shapes, could some day find themselves in flexible electronics and equipment that needs to be rolled up before deployment.

The shape-shifting antennas are still in the lab and the researchers from North Carolina State University are not sure when the invention would hit the market.

Even so, the team can already envision such novel antennas being used in military equipment that can then be rolled up or folded, trekked to another site and unpackaged with no wear on the antenna. The antenna could also be used to monitor motion in structures such as bridges. As the bridge expands and contracts, it would stretch the antenna – changing the frequency of the antenna, and providing civil engineers information wirelessly about the condition of the bridge.

And study researcher Ju-Hee So is working on artificial eyes in which such twistable antennas would send visual signals to the brain to help blind individuals regain some sort of sight.

Like all antennas, most of which are made out of copper and are not re-shapable, the bendy variety would collect or emit radio waves of a certain frequency.

The work is detailed in the Nov. 23 issue of the journal Advanced Functional Materials.

To build simple dipole antennas that work on the same principle as bunny ears for an old TV, Michael Dickey and his colleagues started with a piece of elastic silicon that resembles a flat ribbon. Then, they injected an alloy of gallium and indium into tiny channels within the stretchy ribbon. Each channel is just a tad thicker than the width of a human hair and has two openings, one at either end.

The alloy is liquid at room temperature and can slosh around like water, with one key difference.

"The reason this works is that the bulk of it is like water, with low viscosity, but the surface oxidizes and forms a skin, and that skin is what holds it in the channel," Dickey told LiveScience.

Even if you were to cut through the antenna with a razor blade, the oxidizing process would happen so quickly another skin would immediately form, meaning no leaks.

The sloshing liquid also means such antennas could collect signals with a variety of wavelengths.

"Because the alloy remains a liquid, it takes on the mechanical properties of the material encasing it," Dickey said. "This flexibility is particularly attractive for antennas, because the frequency of an antenna is determined by its shape. So you can tune these antennas by stretching them."