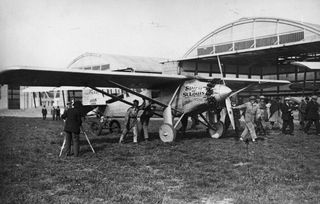 Charles Lindbergh arrives at Le Bourget, near Paris, in his Spirit of St. Louis aircraft on May 21, 1927.
(Image: © Hulton Archive/Getty Images)

American aviator Charles Lindbergh was the first person to fly solo across the Atlantic Ocean on May 21, 1927, without stopping.

On May 20, 90 years ago, after completing several test flights and setting a transcontinental record, Lindbergh hopped aboard his Spirit of St. Louis plane at Roosevelt Field in Long Island, New York, and took to the skies for his 3,610-mile (5,800 kilometers) journey. On May 21, after soaring for 33 hours, 30 minutes, Lindbergh landed at Le Bourget Field near Paris, France. There, "he was greeted by a wildly enthusiastic crowd of 100,000," according to the Smithsonian's National Air and Space Museum, where the famous single-engine monoplane is on display.

"Our messenger of peace and goodwill has broken down another barrier of time and space," said President Calvin Coolidge of the exceptional flight. [The Sky's the Limit: 15 Key Milestones in Aviation History]

On April 30, 1928, Lindbergh flew the Spirit from St. Louis to Washington, D.C. — the craft's final flight — where he donated it to the Smithsonian.

The so-called Lindbergh boom, in which stocks for the aircraft industry soared and interest in flying skyrocketed, can be attributed to Lindbergh's transatlantic flight, according to the Air and Space Museum. For instance, in 1931, Swiss physicist Auguste Piccard and his assistant Charles Kipfer flew into the history books when they completed a 17-hour flight aboard a hot-air balloon; they were the first to ride a balloon into the stratosphere, ascending to 51,775 feet (15,781 meters).

Lindbergh did not always fly through smooth skies in his personal life. In March 1932, his 20-month-old son was kidnapped and murdered. (The FBI has a detailed account of the kidnapping, murder and investigation that led to the conviction of Bruno Richard Hauptmann, who was put to death by electrocution on April 3, 1936.)

In 1932, Amelia Earhart attempted, unsuccessfully, to become the first woman to take a nonstop solo flight across the Atlantic.