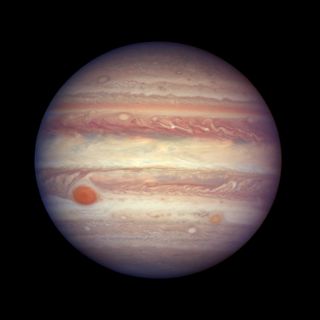 Jupiter as seen by NASA’s Hubble Space Telescope on April 3, 2017, just four days before the planet comes into “opposition” (forms a straight line with Earth and the sun).
(Image: © NASA, ESA, and A. Simon (GSFC))

Jupiter's gorgeous bands and raging storms are on full display in a jaw-dropping new photo by NASA's Hubble Space Telescope.

Hubble snapped the photo on Monday (April 3), just four days before Jupiter comes into "opposition" — that is, forms a straight line with Earth and the sun, with Earth in the middle.

Opposition also coincides with Jupiter's closest approach to our planet; on Friday (April 7), the gas giant will be just 415 million miles (670 million kilometers) from Earth. (However, Jupiter will actually come a smidge closer to Earth on Saturday, April 8.)

At its most distant, Jupiter gets about 601 million miles (968 million km) from Earth.

The image, which Hubble captured with its Wide Field Camera 3 instrument, resolves details as small as 80 miles (129 km) across in Jupiter's dynamic atmosphere, NASA officials said. So the planet's many colorful bands are clearly visible.

"These bands, with alternating wind motions, are created by differences in the thickness and height of the ammonia ice clouds; the lighter bands rise higher and have thicker clouds than the darker bands," NASA officials wrote in an image description today (April 6). "The bands are separated by winds that can reach speeds of up to 400 miles (644 kilometers) per hour."

The famous Great Red Spot also stands out. This giant storm is larger than Earth, but it has been shrinking since the late 19th century, for reasons astronomers don't understand. Hubble will continue observing Jupiter, searching for clues to this mystery, NASA officials said.

Jupiter comes into opposition every 13 months, so the giant planet's next close Earth approach will be in May 2018.

The new Hubble observations were taken at roughly the same time that NASA's Jupiter-orbiting Juno probe made its latest close approach to the giant planet. That's no accident; scientists want to compare the data collected by the two spacecraft, agency officials said.

Hubble, a joint mission of NASA and the European Space Agency, has been orbiting Earth for nearly 27 years. The telescope launched aboard the space shuttle Discovery on April 24, 1990, and was deployed a day later.