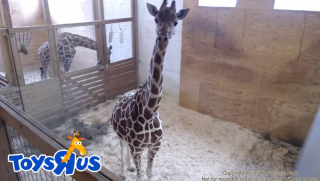 For the many millions of internet viewers who are checking YouTube (or Live Science) daily to see if April the pregnant giraffe has had her calf, the vigil continues — when the sun rose this morning (April 3), the big-bellied giraffe was still pregnant.

However, April's many anxious fans can now subscribe to receive text alerts when April goes into labor — and for the first disclosure of whether the newborn is male or female.

The announcement of the calf's gender will be made after its birth by a text alert system, revealing the big news hours in advance of an official press release, representatives of Animal Adventure Park (AAP), the facility in Harpursville, New York, where April is housed, reported April 3 on Facebook. [Baby Watch! 'Giraffe Cam' Tracks Expectant Mother]

While viewers have expressed concern on social media about April being past her due date or in distress, there is no cause for alarm, according to April's veterinarian "Dr. Tim," who described exactly what people should not be worrying about, in a post shared April 2 on Facebook.

But there were also some positive answers to curious queries.

"Yes, she remains happy and comfortable (considering the circumstances). Yes, she will have this calf when she is good and ready," the veterinarian said.

He agreed that it is going to be "awesome" when the baby finally does arrive, even if right now the mother giraffe "just isn't quite ready to give the world what it wants," he said on Facebook.

April's fans can sign up for real-time updates about her condition and the delivery of her baby for $4.99 on the AAP website.