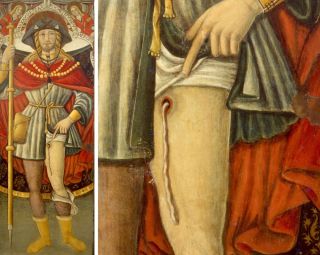 In a medieval painting, a possible Guinea worm can be seen creeping out of the leg of St. Roch, a 14th-century French pilgrim.
(Image: © Raffaele Gaeta)

Italian researchers examining a medieval painting may have found the earliest visual depiction of dracunculiasis, a horrifying parasitic infection in which a worm up to 3 feet long creeps out of the skin.

Currently endemic to areas in Chad, Ethiopia, Mali and South Sudan, the disease is transmitted to people who drink water infested with water fleas that are in the Cyclops genus, and that contain larvae of the guinea worm (Dracunculus medinensis). One year after the person ingests the contaminated water, a spaghetti-like worm 2 to 3 feet (0.6 to 1 meter) long erupts from a blistered area of the person's skin — usually in the lower part of the leg, according to he World Health Organization.

To relieve the pain and burning feeling that the worm causes when it erupts, the victims seek out water, prompting the worm to discharge its larvae, which starts the whole cycle over again. [The 10 Most Diabolical and Disgusting Parasites]

According to a study to be published in a forthcoming issue of the Journal of Infection, dracunculiasis clearly appears for the first time in a 15th-century altarpiece on display at the Pinacoteca di Brera (Painting Gallery), located in southern Italy's Puglia region.

The artwork is considered a rare example of Late Gothic painting in Puglia and depicts St. Roch, a 14th-century French pilgrim who is said to have healed victims of the plague, and came down with it himself.

"Indeed, St. Roch is typically represented with a bubo on the upper thigh," paleopathologist Raffaele Gaeta, at the University of Pisa, Italy, told Live Science.

The painting in Bari, showing the saint as a bearded man with long, curly blonde hair, is no exception. The anonymous painter portrayed St. Roch with a swelling on the left thigh, made visible by a rolled-down sock.

"However, the altarpiece adds a new, realistic detail: a white, thin filament comes out of the lesion and almost reaches the knee," Gaeta said.

He noted that art historians wrongly identified this element as a long drop of pus emerging from the infected wound. [25 Grisly Archaeological Discoveries]

"We believe instead that the painter portrayed an ancient case of dracunculiasis, an infectious disease caused by a nematode worm, the Dracunculus medinensis, well known in antiquity," Gaeta and colleagues Fabrizio Bruschi and Valentina Giuffra wrote in their study.

Dracunculiasis has plagued humankind for thousands of years. The Bible's Old Testament, dating to 1450 B.C., refers to the worm, according to the Carter Center. It is mentioned in the Egyptian medical Ebers Papyrus, dating from 1550 B.C., which suggested extracting the worm from the body by winding it around a stick — a method still used today.

Further evidence for the worm's existence in ancient Egypt was provided in the 1970s: A calcified guinea worm was found in the abdominal cavity of a 3,000-year-old mummy.

Parasitologists believe the biblical "fiery serpents" that attacked the Israelites who had escaped Egypt might have been guinea worms. The infection would have been widespread in the Middle East at the time of the exodus, as it was until recently.

"The worm doesn't kill, but leaves the victim in disabling misery," Gaeta said.

"The parasite could have earned its nickname 'fiery serpent' because it causes excruciating burning pain as it bursts through the skin," he added.

Although the disease is not documented in Italy, it is possible that the anonymous painter noticed the parasite in the wound of some traveler who arrived in Bari, which was an important port for people traveling to the East, particularly Syria and Palestine.

"He then added the long and thin white filament that comes out of the leg as a note of extreme realism," Gaeta said.

According to Francesco Galassi, a paleopathologist at Zurich University's Institute of Evolutionary Medicine, the research "offers room for a more general reflection on the importance of prevention of infectious diseases for international travelers in the modern world."

"I find it rather captivating that the authors hypothesize that this disease might have been portrayed on an individual coming to Bari from regions where, unlike the Italian Peninsula, the condition was endemic," Galassi told Live Science.

As a result of a 30-year campaign led by the Carter Center, a charity set up by former president Jimmy Carter, dracunculiasis will likely be the second human disease in history after smallpox to be eradicated. It will be the first parasitic disease to be wiped out and the first disease to be eradicated without the use of a drug or vaccine.

In 2016, only 25 cases of guinea-worm disease were reported globally, down from an estimated 3.5 million cases in 1986, according to the WHO's Global Health Observatory.