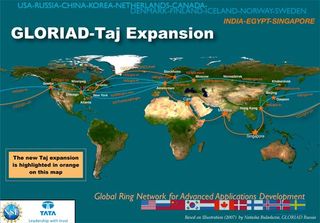 A newly expanded global Internet, to focus solely on science and education, now includes half of the world's countries. The high-speed fiber-optic network connects users at speeds of 10 Gbps.
(Image: © GLORIAD.)

A super high-speed global Internet devoted solely to science and education has just expanded to include half the countries of the world, and yes, you at home can be jealous.

The combined GLORIAD-Taj fiber-optic network is aimed at helping scientists collaborate, and to improve education in schools and universities. The network offers large-bandwidth connections for scientists and educators who seek to avoid the often bogged-down Internet the rest of us are stuck with.

Your child may have used the setup at school, but there are no plans to make it available for home use.

"Scientists deal with lots and lots of high-intensity data, and this dedicated other system enables transfer of huge amounts of data quickly and efficiently," explained NSF spokesperson Lisa-Joy Zgorski. She added, however, that it's not an elitist network.

"This is not aimed to only connect the scientific elite, but to bring science to the world through schools and universities," Zgorski told LiveScience.

GLORIAD started as a 1997 NSF-funded project that created MIRNET, connecting scientists in the United States and Russia. In 2004, it was expanded to China, Korea, Canada and five Nordic countries. The cyber-network now reaches half the countries on the planet and 10 million IP addresses for an estimated 30 million or more users. A new exchange point in Alexandria, Egypt, allows ties throughout the Middle East, Africa and Central Asia and the Caucasus regions.

Among other uses, the network is employed to remotely operate telescopes and microscopes. It's particularly useful for data-intensive visualizations. Researchers can carve out portions of the network for specific, uninterrupted long-distance collaborations that might include a lot of video conferencing and other intensive data exchange.

"Science is increasingly data-driven and collaborative, and does not respect national borders," said Ed Seidel, acting assistant director of NSF's Math and the Physical Sciences Directorate. "High-speed optical networks are critical to both national and international scientific efforts."

Some data for geeks: The upgrade beefed up U.S.-China network service by a factor of 4, from 2.5 Gbps to 10 Gbps.

GLORIAD's Taj Network is not the same as "Internet 2," a domestic project aimed at connecting U.S. scientists with one another.