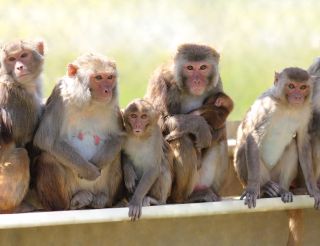 A new type of male contraceptive that blocks the flow of sperm effectively prevented pregnancy in female monkeys, a new study finds.

The success of the contraceptive procedure in male monkeys means that human men may be up next in clinical trials, the researchers said in a statement. Currently, options for male contraceptives include condoms, withdrawal and vasectomy — the latter of which is typically considered to be a permanent procedure.

However, the new contraceptive has only been tested in animals, and much more research is needed still needed to determine whether it is safe to use in people, and whether it works.

The new contraceptive, called Vasalgel, is injected into the vas deferens (the tube that carries sperm from the testicle to the urethra), where it forms an adhesive hydrogel. This hydrogel acts as a barrier, blocking sperm from flowing out of the vas deferens. In a separate study in rabbits, scientists were also able to reverse the procedure, flushing out the Vasalgel and restoring the flow of sperm, according to the study, which was published today (Feb. 6) in the journal Basic and Clinical Andrology.

In the new study, the researchers performed the procedure on 16 male rhesus macaques, 10 of which had previously impregnated female monkeys. The monkeys were given one week to recover from the procedure and then were housed with female monkeys for at least one breeding season, according to the study. The monkeys were routinely monitored, and no pregnancies occurred, the researchers wrote. [Animal Sex: 7 Tales of Naughty Acts in the Wild]

"We were impressed that this [procedure] worked in every single monkey, even though this was our first time trying it," lead study author Dr. Angela Colagross-Schouten, a veterinarian at the University of California, Davis, said in a statement.

Although the finding suggests procedure prevented pregnancies, the researchers noted that several of the male monkeys experienced minor complications after the procedure, including one instance in which the Vasalgel was injected into the wrong location, according to the study.

"Vasectomies are a routine procedure for nonhuman primate veterinarians, so to have similar or even slightly better outcomes trying a brand-new procedure is very encouraging," Colagross-Schouten said.

The researchers noted that additional research is needed that studies the possibilities of reversing the effects of the injection in monkeys by flushing out the hydrogel.

Previous types of male contraceptives have been studied in humans. One study, which used a hormonal injection to decrease sperm production, however, had to be stopped early due to unwanted side effects in the men in the study, such as mood disorders.

The study was funded primarily by the Parsemus Foundation, which owns Revolution Contraceptives, LLC, the company that holds a patent on Vaselgel.