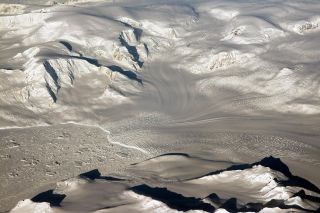 Using data from NASA's Operation IceBridge missions, ice motion measurements and existing information on Antarctica's topography, researchers discovered a network of valleys under the ice in West Antarctica. These so-called oceanic troughs expose the area's glaciers to warm water from the surrounding oceans, causing the ice to melt from below, the scientists said.

The discovery of these valleys will help ongoing observations of the Antarctic glaciers' melt, said study lead author Romain Millan, a graduate student in the Department of Earth System Science at the University of California, Irvine. [Photo Gallery: Antarctica's Pine Island Glacier Cracks]

"Based on our research, we now have a much clearer picture of what is hiding under these large glaciers located in a particularly vulnerable sector of West Antarctica," Millan said in a statement.

According to their estimates, Millan and colleagues warn that global sea levels could rise by nearly 4 feet (1.2 meters) if all of the glaciers were to collapse in an area known as the Amundsen Sea Embayment, which makes up a rapidly changing part of the West Antarctic Ice Sheet.

While the threat of complete collapse and subsequent sea-level rise is real, there are some features of the topography that could slow the glaciers' retreat, the scientists said. For example, their study found that ocean water meets the glaciers and ice shelves at a depth of about 2,300 feet (700 m) — just above some of the warmest waters in the region.

"This means that the glaciers are, reassuringly, not exposed to the warmest waters, but it makes projections more challenging because the pathways of the ocean heat are narrow and more sensitive to fluctuations," said study co-author Eric Rignot, an Earth scientist at UC Irvine.

The depths of the channels were a surprising discovery, Millan said, because previous estimates were much shallower. For instance, the massive submarine valleys under the Crosson and Dotson ice shelves start about 3,930 feet (1,200 m) below the ice and slope up to points 1,640 feet (500 m) beneath Crosson and 2,460 feet (750 m) beneath Dotson.

By getting a better understanding of the depths at which the warm ocean water is interacting with the glaciers, the researchers can get a more precise measurement of the area's melt, they said.

"It gives new insight into the future fate of these glaciers and the potential influence of warm ocean water that can melt away ice from below," Millan said of the research.

The study's findings are detailed in a paper published online Jan. 9 in the journal Geophysical Research Letters.