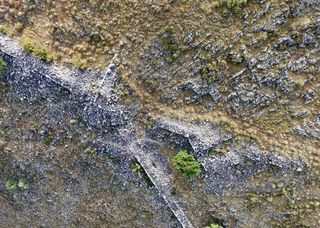 City walls, gates and towers are visible as ruins aboveground on the hill of Strongilovoúni in western Thessaly.
(Image: © SIA/EFAK/YPPOA)

An ancient Greek settlement thought to be a small village was actually an important city, new excavations reveal.

The ruins at Vlochós in western Thessaly have been known for 200 years, researchers with the Vlochos Archaeological Project wrote on their blog. Until now, though, the site hadn't been studied systematically, and archaeologists had considered it something of a "backwater," fieldwork leader Robin Rönnlund, a doctoral student in archaeology at the University of Gothenburg in Sweden, said in a statement.

"Our project therefore fills an important gap in the knowledge about the area and shows that a lot remains to be discovered in the Greek soil, Rönnlund said. [The 25 Most Mysterious Archaeological Finds on Earth]

The researchers, part of a joint effort of the Ephorate of Antiquities of Karditsa in Greece and the Swedish Institute at Athens, first conducted the fieldwork in September 2016. Instead of digging, the archaeologists used ground-penetrating radar, a method that sends radar pulses into the ground and detects the reflection of the pulses off buried objects. The team found evidence of a town square and street grid. They also found ancient pottery and coins. The area inside the city walls measures 40 hectares (99 acres), Rönnlund said.

"Our oldest finds are from around 500 B.C.," Rönnlund said, "but the city seems to have flourished mainly from the fourth to the third century B.C., before it was abandoned for some reason, maybe in connection with the Roman conquest of the area."

Little evidence of the city is visible aboveground, though ruins of gates, towers and the city walls can be seen. The project researchers will not be collecting archaeological objects from the site, the researchers wrote on their blog; some small finds, like coins, might be taken to the Archaeological Museum of Karditsa, but the goal is to do a noninvasive exploration of the city. One artifact the team discovered was a small fragment of red-and-black painted pottery dated to the late sixth century B.C.

Vlochós is about 350 miles (560 kilometers) north of Athens, in western Thessaly, an area that archaeologists had long believed was largely rural and undeveloped in antiquity. The ruins sit on a 705-foot-tall (215 meters) hill called Strongilovoúni.

"What used to be considered remains of some irrelevant settlement on a hill can now be upgraded to remains of a city of higher significance than previously thought," Rönnlund said.

The researchers plan to return to the site in 2017 for further study.