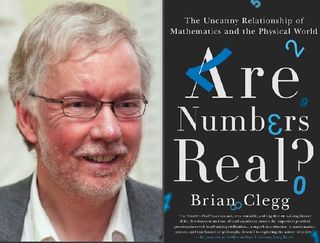 Have you ever wondered what humans did before numbers existed? How they organized their lives, traded goods, or kept track of their treasures? What would your life be like without them? Numbers began as simple representations of everyday things, but mathematics rapidly took on a life of its own, occupying a parallel virtual world. In "Are Numbers Real?," Brian Clegg explores the way that math has become more and more detached from reality, and yet despite this is driving the development of modern physics. Below is an excerpt from "Are Numbers Real?" (St. Martin's Press, 2016).

Not entirely surprisingly, inﬁnity is a topic that never fails to stimulate the mind. Thoughts about the nature and existence of inﬁnity go back all the way to the Ancient Greeks. They were certainly aware that a sequence of numbers like the positive integers, the simple counting numbers would go on forever. If there were a biggest integer—call it max—then there surely could always be max + 1, max + 2, and so on. But the whole idea of inﬁnity made the Greeks uncomfortable. Their word for it, apeiron, suggested chaos and disorder.

The Greek philosopher who took the deﬁnitive approach to inﬁnity for the period (a point of view that would remain dominant for centuries to come) was Aristotle, born in 384 BC in northern Greece. Aristotle argued that inﬁnity was both necessary and impossible. He used examples of aspects of the universe that he considered inﬁnite. The integers, as we have seen, or the span of time—which he argued had no end. And he believed that something could be divided up an inﬁnite set of times. But equally he came up with a range of often confusing arguments as to why inﬁnity could not exist in the real world. For example, he pointed out that a body is deﬁned by its boundaries. If a body were inﬁnite it would have no boundaries, hence it could not exist.

After what was clearly a considerable mental struggle, Aristotle ﬁnally decided that inﬁnity was a potential, rather than a concept that was fulﬁlled in reality. This “potential inﬁnity” was something that could be aimed for, but could never practically be achieved. Inﬁnity existed, but could not be made real on demand. To illustrate the concept he used the neat example of the Olympic games. The games existed—there was no doubt of that. It wasn’t a ﬁctional concept. But generally speaking, if someone asked you to show him or her the Olympic games, you couldn’t. The games were a potential entity, rather than something you could point at and identify. Aristotle was careful to point out, though, that some potential entities were going to become actual at a point in space or time, yet this wasn’t the case with inﬁnity.

This neutered concept of potential inﬁnity was exactly what Newton and Leibniz (see chapter 9) were dealing with when they devised calculus. The inﬁnity of calculus is something that we head toward—it is a limit that is never practically reached. And the target is exactly what the familiar symbol for inﬁnity, the lemniscate (∞) represents. It is the symbol for Aristotle’s potential inﬁnity. The lemniscate was introduced by Newton’s contemporary, John Wallis, who had written a rather dull treatise on the three-dimensional shapes known as conic sections, which are the result of cutting a pair of cones positioned point to point along various planes. (No one can accuse mathematicians of not knowing how to have fun.) Wallis just throws in a line that says “let ∞ represent inﬁnity” without ever explaining where this symbol comes from.

For the vast majority of mathematicians, with one notable exception, this was sufficient to carry all the way through to the nineteenth century. In fact, potential inﬁnity was generally considered to be the only respectable way to think about the inﬁnite. For example, Carl Friedrich Gauss, the eminent nineteenth- century German mathematician deﬁnitively remarked:

I protest against the use of an inﬁnite quantity as an actual entity; this is never allowed in mathematics. The inﬁnite is only a manner of speaking, in which one properly speaks of limits to which certain ratios can come as near as desired, while others are permitted to increase without bound.

The exception to this blinkered thinking was the remarkable Galileo Galilei. The ﬁrst thing that springs to mind when Galileo is mentioned was his championing  of  the  Copernican  theory that put the Sun rather than the Earth  at  the  center  of  the  universe, leading to his trial by the Inquisition and permanent house arrest. However, in scientiﬁc terms his most signiﬁcant work was the book he published in 1638 called Discorsi e Dimostrazioni Matematiche Intorno a Due Nuove Scienze (Discourses and Mathematical Demonstrations Concerning Two New Sciences).  This was his masterpiece of physics, laying the ground for Newton’s triumphant completion of this work on mechanics, forces, and movement.

Like his book on Copernican theory that got him into so much trouble, this new work was structured as a conversation between three characters, a format that was very popular at the time. Written in conversational Italian rather than stuffy Latin, it remains far more readable today than the formal and often near-impenetrable work of Newton. Given his position, serving a life sentence for the publication, it was remarkable that Galileo got the book published at all. He attempted to do so originally in Venice, then proud of its independence from Rome, but there was still a requirement to get the go-ahead from the Inquisition, which had issued a blanket prohibition on printing anything that Galileo wrote.

If there was one thing that Galileo excelled in, it was stubbornness. Despite the prohibition, despite the risks of even indirectly evading it, when the Dutch publisher Lodewijk Elzevir visited Italy in 1636, Galileo managed to get a copy of his new manuscript to him. One fascinating aspect of the book as it ﬁnally came to print is the dedication. In earlier years, Galileo had always attempted to dedicate his writing to a power ﬁgure, who might as a result give him patronage. This book he dedicated to a former pupil who was now the French ambassador to Rome, Count François de Noailles. However, where previously Galileo could simply lavish as much praise as was possible (and plenty was possible in the sycophantic style of the time), here he had to be more careful, as the last thing he wanted to do was get Noailles into trouble with the Inquisition.

In the wording, Galileo combined deviousness with an apparent naïveté. It is highly unlikely that the Inquisition fell for his attempt at deception— though, in practice, they seemed to have turned a blind eye. According to Galileo:

I had decided not to publish any more of my work. And yet in order to save it from complete oblivion, it seemed wise to leave a manuscript copy in some place where it would be available at least to those who follow intelligently the subjects which I havetreated. Accordingly I chose ﬁrst to place my work in your Lord- ship’s hands ...

So, on the one hand Galileo was thanking Noailles for his help. But at the same time he didn’t want to make it sound as if Noailles had been directly responsible for the publication, so he threw in some mysterious intermediaries:

I was notiﬁed by the Elzevirs that they had these works of mine in press and that I ought to decide upon a dedication and send them a reply at once. This sudden unexpected news led me to think that the eagerness of your Lordship to revive and spread my name by passing these works on to various friends was the real cause of their falling into the hands of printers who, because they had already published other works of mine, now wished to honor me with a beautiful and ornate edition of this work.

He could thank Noailles, but also managed to blame un- named friends of the ambassador for passing the manuscript to the printer. It’s clear that the idea that all this had happened without Galileo’s knowledge until the book was almost ready to print was a ﬁction. Not only did he ensure that Elzevir received a copy of the manuscript on his Italian visit, there was a considerable correspondence between Galileo and Elzevir over the content of the book. Galileo was the kind of author that cause publishers to tear their hair out, wanting to tweak his output to the last possible moment before going to print. This is bad enough with today’s electronic printing, but was a nightmare when each page had to be carefully set up in movable type and made into a physical printing plate. But whether the Inquisition was fooled or simply looked the other way, it did not intervene and the book was published, if unavailable for sale in Galileo’s native Italy.

The “two new sciences” in the book’s title were those of the nature of solid matter and an analysis of motion, and it was in the ﬁrst section that the topic of inﬁnity came up. In trying to understand why solid matter sticks together so effectively—why, for instance, a piece of metal is so hard to break up—one of Galileo’s protagonists suggested that it is the vacuum between the tiny particles of matter that held them together. (He was wrong, it is electromagnetism, but it wasn’t a bad idea.) This theory was queried by Simplicio, whose role in the book was to challenge new thinking, mostly sticking to Ancient Greek ideas. Simplicio argued that there could only be a tiny bit of vacuum in so small a space, which could only apply a tiny force—far smaller than the powerful force that holds a piece of metal together.

Excerpted from "Are Numbers Real?: The Uncanny Relationship of Mathematics and the Physical World" by Brian Clegg. Copyright © 2016 by the author and reprinted with permission of St. Martin's Press, LLC.