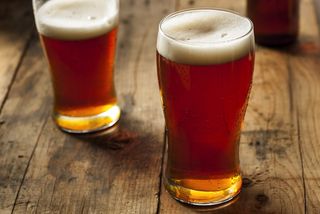 A team of researchers worked with a brewery in Milwaukee to recreate an ancient beer from remnants of the alcoholic beverage that were found at an Iron Age burial site in Germany, reported Milwaukee Public Radio (WUWM). Though the acidic soil had dissolved the skeleton, archaeologists found metal weapons and a cauldron at the burial site.

The cauldron, which dates back to between 400 B.C. to 450 B.C., was full of an ancient mead when it was buried, according to study leader Bettina Arnold, an archaeologist and anthropologist at the University of Wisconsin-Milwaukee. [Raise Your Glass: 10 Intoxicating Beer Facts]

"The dead man in Tumulus 17 Grave 6 had been sent into the afterlife not only with his weapons but with about 14 liters of an alcoholic beverage that he could have used to establish himself as an important person in the next world as he had been in this one," Arnold, who uncovered the cauldron back in 2000, explained in a blog post.

Milwaukee's Lakefront Brewery then worked with the researchers' recipe to re-create the brew, which was available to taste during the 6th Annual Wisconsin Science Festival  on Oct. 22, where the research was presented.