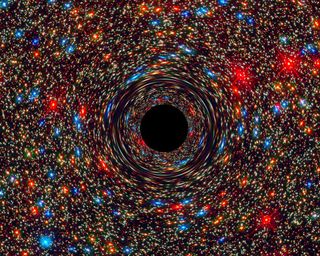 Black holes are galactic monsters with voracious appetites: Once something crosses the monster's event horizon (the black center region in this computer-simulated image of a supermassive black hole), it doesn't come out.
(Image: © NASA, ESA, and D. Coe, J. Anderson, and R. van der Marel (STScI))

There are some things in the universe that you simply can't escape. Death. Taxes. Black holes. If you time it right, you can even experience all three at once.

Black holes are made out to be uncompromising monsters, roaming the galaxies, voraciously consuming anything in their path. And their name is rightly deserved: Once you fall in, once you cross the terminator line of the event horizon, you don't come out. Not even light can escape their clutches.

But in movies, the scary monster has a weakness, and if black holes are the galactic monsters, then surely they have a vulnerability. Right?

Hawking to the rescue

In the 1970s, theoretical physicist Stephen Hawking made a remarkable discovery of a secret buried under the complex mathematical intersection of gravity and quantum mechanics: Black holes glow, ever so slightly, and given enough time, they eventually dissolve. [Hawking Wants to Power Earth With Mini Black Holes: Crazy or Legit?]

Wow! Fantastic news! The monster can be slain! But how? How does this so-called Hawking radiation work?

Well, general relativity, which describes how gravity behaves, is a supercomplicated mathematical theory. Quantum mechanics is just as complicated. It's a little unsatisfying to respond to "How?" with "A bunch of math," so here's the standard explanation: The vacuum of space is filled with virtual particles, little effervescent pairs of particles that pop into and out of existence, stealing some energy from the vacuum to exist for the briefest of moments, only to collide with each other and evaporate, returning to nothingness.

Every once in a while, a pair of these particles pops into existence near an event horizon, with one partner falling in and the other free to escape. Unable to collide and evaporate, the escapee goes on its merry way as a normal nonvirtual particle.

Voilà! The black hole appears to glow as particles and radiation escape. In doing the work to separate a virtual particle pair and promote one of them into normal status, the black hole gives up some of its own mass. Subtly, slowly, over the eons, black holes dissolve. Not so black anymore, huh?

Here's the thing: I don't find that answer especially satisfying, either. For one, that explanation does not appear in Hawking's original 1974 paper which unveiled the process, and for another, it's just a bunch of jargon that fills up a couple of paragraphs but doesn't really go a long way in explaining this behavior. It's not necessarily wrong, just … incomplete.

The way of the field

First things first: "Virtual particles" are neither virtual nor particles. In quantum field theory — scientists' modern conception of the way particles and forces work — every kind of particle is associated with a field that permeates all of space-time. These fields aren't just simple bookkeeping devices; they are active and alive. In fact, they're more important than particles themselves. You can think of particles as simply excitations — or "vibrations" or "pinched-off bits," depending on your mood — of the underlying field.

Sometimes, however, those wiggles don't really go anywhere. They fizzle out before they get to do something interesting. Space-time is full of the constantly fizzling fields.

What does this have to do with black holes? Well, when one forms, some of the fizzling quantum fields can get trapped — some permanently, appearing within the newfound event horizon. Fields that fizzled near the event horizon end up surviving and escaping. But due to the intense gravitational time dilation — which says that the faster you travel, the more time seems to slow down — near the black hole, they appear to come out much, much later in the future. [8 Ways You Can See Einstein's Theory of Relativity in Real Life]

In their complex interaction and partial entrapment with the newly forming black hole, the temporarily fizzling fields get "promoted" to become normal, everyday ripples — in other words, particles.

So Hawking radiation isn't so much about particles popping into existence near a present-day black hole, but rather the result of a complex interaction at the birth of a black hole that persists until today. You can think of that complex interaction as preventing the black hole from ever growing to its maximum possible extent — even at its birth it was doomed to disappear.

One way or the other, as far as we can tell, black holes do dissolve. I emphasize the "as far as we can tell" bit because, as I said at the beginning, generality is all sorts of hard, and quantum field theory is a beast. Put the two together, and there's bound to be some mathematical misunderstanding.

But with that caveat, we can still look at the numbers, and those numbers tell us we don't have to worry about black holes dying anytime soon. A black hole with the mass of the sun will last a wizened 10^67 years. Considering that the current age of our universe is a paltry 13.8 * 10^9 years, that's a good amount of time. But if you happened to turn the Eiffel Tower into a black hole, it would evaporate in only about a day. I don't know why you would, but there you go.

Learn more by listening to the episode "Do black holes die?" on the Ask A Spaceman podcast, available on iTunes and on the Web at http://www.askaspaceman.com. Thanks to Andy, Rowan H., @MarkRiepe, @ChattaboxReilly, and @Just_Rachel for the questions that led to this piece! Ask your own question on Twitter using #AskASpaceman or by following Paul @PaulMattSutter and facebook.com/PaulMattSutter.